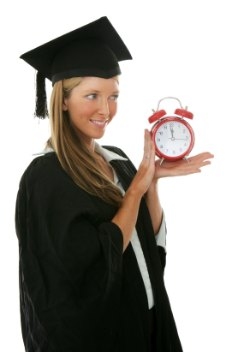 In many public universities throughout the country, officials are pushing students to earn their degrees within four years.

As reported by The Washington Post, data from the federal government indicates that overall, fewer than half of students graduate in four years at 33 of the 50 state flagship schools. The four-year graduation rate is 52 percent for private colleges and just 31 percent for public institutions.

"The longer it takes people to graduate, the less likely they are to graduate -- ever," noted William Bowen, former Princeton president and co-author of the book "Crossing the Finish Line," who was quoted by the Post.

Many colleges are pushing for earlier degree attainment, in part because public tuition and fees have increased significantly. As a result, state lawmakers have begun targeting institutions that receive tax dollars but do not produce enough graduates.

For example, according to Texas state Senator Florence Shapiro, who was interviewed by the Post, Texas pays about $7,563 per student. Each student that remains in school longer than expected, she said, "prevents another student from coming in and starting the process."

Public institutions are addressing the problem in various ways: The Post reported that Indiana University will offer discounted summer courses to encourage graduating on time. The University at Buffalo in New York recently created an on-time graduation pledge, which has been signed by half the incoming class.

In West Virginia, where 60 percent of students who attend college in the state do not complete their degrees, officials are taking action: Recently, a task force organized by the Higher Education Policy Commission and West Virginia Council for Community and Technical College Education created a five-step plan to improve the state's college completion rate. As reported by the Charleston Gazette, recommendations included improving remediation education courses, increasing adult completion rates, and tying higher education funding to college completion rates.

At Dalton State College in Georgia, officials have allocated a significant portion of the school's fiscal year 2013 state budget towards college completion programs.

"We need to create more college graduates, pure and simple," said John Schwenn, president of the college, who was quoted by The Dalton Daily Citizen. "We are grateful to the Legislature for the additional funds allocated to us this year, and we intend to use some to them to help the governor realize his goal of producing 248,000 more college graduates in the next eight years."