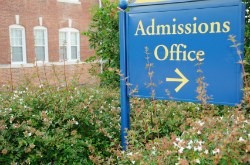 Public universities throughout the country are continuing to focus on luring students from out-of-state in an effort to increase revenue and diversity.

The Tennessean reported that out-of-state freshmen attending Middle Tennessee State University's Murfreesboro campus can pay three times as much as in-state students. Consequently, the university expects to begin recruiting more students from Georgia and Florida next year, which are projected to have more high school graduates than their state schools can accommodate.

"The competitive environment nowadays is requiring enrollment management directors to consider aggressive out-of-state recruiting strategies," said David Cicotello, associate vice provost of admissions at MTSU, who was interviewed by The Tennessean. "We have probably been modestly recruiting out of state, in terms of sending staff to college fairs and out-of-state locations. I expect that that's going to be changing."

Ed Blaguszewski, executive director of news and media relations at the University of Massachusetts, agreed. He told The Massachusetts Daily Collegian that the state financial support has been reduced by about $37 million since 2001. As a result, UMass has been increasing its percentage of out-of-state students, which has risen from 19 percent in 2009 to 21 percent this year.

"We expect that trend to continue for the immediate future," he said, noting that more out-of-state students will help pay for additional faculty members, advisers and academic support staff.

Many administrators have pointed out that recruiting students from out of state is not just about revenue--it's about diversity. "We don't want our in-state students to have an insular experience," said Nancy G. McDuff, associate vice president for admissions and enrollment management at the University of Georgia, who was quoted by the Chronicle. "We want our students to learn how to communicate with people who haven't eaten grits for breakfast."

"Dollar$ and Sense: Out of State," dailycollegian.com, October 12, 2011, Elizabeth Sinclair