Racial Disparities in Employment Could Be Due to Lack of Networks 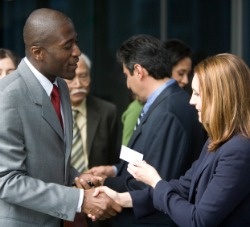 Economists report that the job market is getting better -- just not for everyone. According to The Wall Street Journal, black Americans still contend with an unemployment rate that is about twice the national average. Why? A new study suggests that networking -- not racism -- may be to blame.

The new study will be discussed in depth in the upcoming book "The American Non-Dilemma: Racial Inequality Without Racism." Its author, Rutgers University organization management professor Nancy DiTomaso, suggests that "hidden" forms of racial inequality put black job seekers at a disadvantage. One of the major contributors: networking. According to the study, the modern workplace increasingly relies on personal networking and employee referral programs to fill positions. African-Americans are less connected to these networks and do not have as much "social capital."

"Ninety-nine percent of my interviewees received 70% of the jobs they held over their lifetimes with the extra help of friends or family members," DiTomaso told The Wall Street Journal. "Those who are not part of the networks of people who can help you find a job are at a major disadvantage."

According to Bloomberg Businessweek, DiTomasso conducted nearly 250 interviews with working- and middle-class whites in New Jersey, Ohio and Tennessee. The vast majority said while they believe in civil rights and equal opportunity, they would help friends or family members find jobs when necessary. For white Americans, most of those loved ones also happen to be white.

In a call with reporters, including Bloomberg Businessweek, DiTomaso said that in today's job market, "the favoritism of whites towards other whites may be more important than the discrimination of whites toward racial minorities." What is more, she said, most participants "did not acknowledge (their) group-based advantage." Most did not even identify with an ethnic group. When asked about their neighborhoods' ethnic makeup, DiTomaso noted that most said, "There's no ethnicity here, just normal people like me."

"Whites have the luxury of not thinking about race at all," James Francis, founder and chairman of the Council of Urban Professionals, said in the Russell Sage media call, as reported by Bloomberg Businessweek.

The Russell Sage study comes on the heels of a National Bureau of Economic Research report that suggests that that the subjective "well-being" divide between black and white Americans had declined in the last 30 years. Gaps in income, education and employment, however, are another story. The Wall Street Journal reports that while the national unemployment rate has fallen steadily, from 10 percent in October 2009 to 7.7 percent last month, the jobless rate for African-Americans has stalled at 13.8 percent.

DiTomaso's book will hit the shelves in April, but one can access its table of contents, prologue, and tables and figures by visiting the Russell Sage Foundation's website.