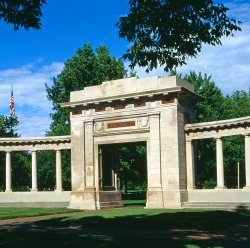 Officials at one of the first colleges in the country to integrate black and white students canceled classes last week following a string of hate speech incidents on campus. The events have launched both a federal investigation and a national debate about how colleges should respond to such crimes, confirmed or otherwise.

The Chicago Tribune reports that the FBI has opened an investigation into possible civil rights violations at Ohio's Oberlin College following reports of hate speech on campus. School officials said in a letter to parents that the events had occurred over several weeks and included "racist, anti-Semitic, and homophobic defacing of (events) posters." The letter noted offensive posts had also been made on popular social media sites through untraceable accounts.

"Based on the college's ongoing conversations with them and the evolution of our investigation, the FBI is initiating an investigation of the bias incidents that have occurred on the campus," Oberlin spokesman Scott Wargo said in an email to the Chicago Tribune. He said Oberlin was "cooperating closely with the FBI in its investigation."

According to Inside Higher Ed, the investigation announcement came on the heels of Oberlin's decision to cancel class last Monday after a student reported seeing a person on campus wearing Ku Klux Klan-like robes. Officials swiftly canceled all classes and all "non-essential events," and instead hosted a teach-in, solidarity demonstration and community convocation.

The move soon drew criticism, however, after Oberlin police announced finding a nonstudent wrapped in a blanket, not KKK garb. According to Inside Higher Ed, conservative commentator and Oberlin graduate Michelle Malkin said the college had a "self-victimization/manufactured racism impulse," and Alan Kors of the University of Pennsylvania said drawing attention to the alleged KKK stunt by administrators was "the worst possible response." Other experts applauded Oberlin's quick response, however, even if it was a misunderstanding. Jen Day Shaw, associate vice president and dean of students at the University of Florida, was among them.

"I would rather see an institution close for a day and be able to have time to plan and prepare for possible escalation of events, safety of the community and other possible resources (such as communitywide education or forums), than have events escalate without being prepared to keep everyone safe and feeling able to work and learn," Shaw wrote in an email to Inside Higher Ed.

In a column he penned for the The Guardian, Northeastern University sociology and criminology professor Jack Levin said campus-based hate speech, like that experienced at Oberlin recently, is much broader problem that demands a wide, institutional response.

"Anti-hate should be built into ongoing programs and policies, both curricular and extra-curricular, in the form of structured opportunities for students to put aside their differences and come together in a spirit of cooperation," Levin wrote.

According to the Chicago Tribune, Oberlin is a private college serving about 3 thousand students. It began admitting African American students in 1855, making it one of the first institutions in the nation to integrate black and white students.