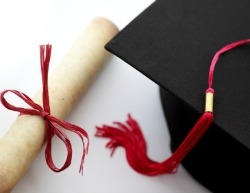 After four years of hard work and determination, the graduates of Radford University finally earned their diplomas. Unfortunately, officials in the university's registrar's office were not as thorough when they produced those diplomas.

According to ABC News, more than 1,400 Radford diplomas from fall 2012 and spring 2013 were produced with two misspellings -- "Virgina" and "therto". Despite the number of spelling errors on many diplomas over the course of several months, graduates as well as the university were unaware of them until Tuesday morning. According to DCist, the mistakes were pointed out in Reddit and confirmed by the university shortly after.

Radford spokesperson Joe Carpenter explained in The Roanoke Times that the mistakes were a result of both human and technical error.

"The error was caused when the commercial software system used to produce the diplomas within the university's registrar's office was upgraded in the Fall of 2012," wrote Carpenter in an email quoted by The Roanoke Times. "That software upgrade required that the diploma narrative be rekeyed into the program. It was during the rekeying process that the typographical errors were introduced into the template."

The Roanoke Times reported that once the errors were finally spotted, graduates and even a couple parents began posting photos and complaints on Twitter and Facebook. University officials said they are working to correct these errors and have set up a customer service email and phone number to answer graduates' questions and concerns.

"Radford University regrets any inconvenience this error may have caused our alumni and will be working to correct these errors in a timely manner," said Carpenter in ABC News.

Many graduates -- and parents of graduates -- expressed frustration and anger towards the typos via social media. According to The Roanoke Times, Becca Barteau, for instance, posted on Facebook: "When you send out a document that is supposed to be a professional piece of paper. You might want to check the spelling…"

Some students, however, were amused by the situation.

"I'm just glad that they're going to reprint them, because it does in a way look bad on the university and I would never hope that they get a reputation from this because they are fixing their mistake," Meghan McNeice, who received her diploma in the mail on Saturday after graduating from Radford in May, told ABC News. McNeice said she plans to keep the misspelled diploma "for laughs."

The Roanoke Times reported that McNeice did express some frustration via Twitter, but she told ABC News that in no way did she think the error was a representation of the quality of education she received at Radford.