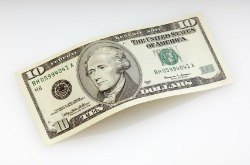 Lawmakers are pushing a bill that would increase the federal minimum wage from $7.25 to $10, but not everyone thinks the measure is a good idea.

Rep. Jesse Jackson, Jr., a Democrat from Illinois, has said that raising the minimum wage will increase the spending power of low-income workers, which will ultimately improve the economy. "We've bailed out banks, we've bailed out corporations, we've bailed out Wall Street," he was quoted as saying by Fox Business. "Now it's time to bail out working people who work hard every day they still only make $7.25."

"This legislation is long-overdue and sorely needed," agreed Rep. John Conyers, Jr., (D-Mich.) who is co-sponsoring the bill along with Rep. Dennis Kucinich (D-Ohio) and Jackson and was quoted by The Huffington Post. "More than 30 million Americans would see their wages increased, which would provide an immediate boost to the economy."

But economists and business owners argue that raising the minimum wage would cost jobs: According to a study from Cornell University's Industrial and Labor Relations Review, a minimum wage hike earlier this decade led to an approximate 20 percent job cut for young, low-skilled workers. And organizations such as the National Restaurant Association, the U.S. Chamber of Commerce, and the National Federation for Independent Businesses all agree that raising the minimum wage will ultimately knock out jobs.

"It is an imposition and an unnecessary one," said Jack Mozloom of the NFIB, who was quoted by The Southern. "The NFIB has opposed minimum wage increases at the state and federal level for many years, for lots of reasons."

Mozloom noted that the least-skilled workers would suffer the most as a result. "More than 80 percent of our members have fewer than 10 employees and have annual revenues of under a half-million a year," he said in The Southern. "They are genuinely mom-and-pop, main street organizations. Most small businesses already pay more than the minimum wage. The ones that don't are on the bubble. This could push them over the edge."

Even slight wage hikes will have a similar negative effect on hiring. In Rhode Island, where the General Assembly is raising the state minimum wage from $7.40 an hour to $7.75, teens will see 200 fewer available jobs this year.

"This loss... will hit especially hard on those who do not have high school degrees," said a report from the Rhode Island Center for Freedom and Prosperity, which was quoted by Providence Business News. "This group is expected to suffer 75 percent of the anticipated loss."