RateMyProfessors Creates List of Colleges With Most Beloved Professors 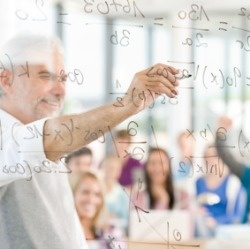 Every year various publications release series of fresh new college rankings, and every year experts explain why students should (or should not) put much stock in them. But between lists detailing the nation's best colleges or the biggest party schools are other, less widely covered rankings that might matter just as much to potential students -- like RateMyProfessors's annual list of schools featuring the best loved professors.

RateMyProfessors is a website powered by mtvU that allows students to review teachers and courses. According to InTheCapital, the site has earned a reputation for providing a fairly honest portrayal of professors. When it comes to their rankings, students pay attention, and this year's list says that the best professors teach at Duke University. This signals a major shakeup in the status quo, reports The Huffington Post: Duke was not even among the top 25 last year. Stanford University -- last year's No. 1 school -- fell to fourth, and many other top 10 schools fell out of the top positions, often eclipsed by large private schools or flagship colleges. The remaining top-five schools: Vanderbilt University, Pennsylvania State University and the University of Wisconsin in Madison.

Though RateMyProfessor's rankings offer insight into which colleges boast some of the best loved professors, it sheds little insight on what, precisely, makes a professor popular. Dr. Ramani Durvasula, a psychology professor at California State University in Los Angeles where she was named Outstanding Professor in 2012, has her own theories. Durvasula, who earns very high marks on RateMyProfessors, said students gravitate toward organized professors who are available for students and who are considered contemporaries in their fields. She said students also appreciate instructors who can "keep it real."

"I find that students welcome a professor who owns it when she doesn't know something, who acknowledges that she doesn't know everything," Durvasula told CityTownInfo, "Arrogance doesn't work well with students - but knowing yourself does."

Whatever makes a professor beloved, one might wonder if -- in the grand scheme -- likeability really matters. Inside Higher Ed reports that a study published earlier this year in the Psychonomic Bulletin and Review suggests charismatic lecturers were not necessarily more effective teachers. Christopher P. Neck, associate professor of management at Arizona State University's W.P. Carey School of Business, disagrees.

"If you do not have charisma and enthusiasm in the classroom, you will never get your students' attention," Neck told CityTownInfo, adding that critics often accuse him of entertaining rather than teaching students. That is not to say that Neck believes rankings by sites like RateMyProfessors are necessarily a perfect barometer for quality teaching, even if he does have an A rating on the site. "I don't put much stock in (ratings)," he said. "In the end, if the students rate me favorably, that is awesome. If not, then at least I can say I did my best and did it my way."