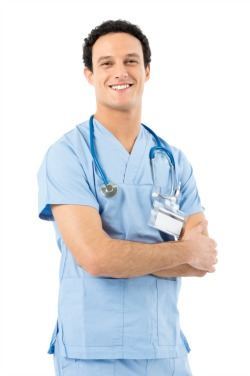 There have been significant efforts to recruit women into male-dominated fields such as science, technology, engineering and mathematics, or STEM, but The Society Pages explored the converse: Are there efforts to recruit men to female-dominated, so-called "pink-collar," fields such as nursing? The numbers suggest yes, and quite successfully, but as a recent study noted, such campaigns often fall back on decidedly gendered stereotypes.

The share of male nurses has grown significantly in the last few decades, reported the Toledo Blade: U.S. Census Bureau data indicated that in 2011, just under 10 percent of the nation's nurses were men, compared to just 2.7 percent in 1970. Some experts suggest that diversifying the nursing population should improve patient care.

"In the past, nursing was more of a pink collar profession and more of a career for women. A lot of times it's seen as a profession for Caucasian women," Craig Albers, chief nursing officer and vice president of patient care services at Mercy St. Charles Hospital, told the Blade. "Now, with large numbers of baby boomers retiring and seeking health care, we need a diverse workforce able to work with a diverse population."

Large numbers of nurses are expected to retire soon, noted the Blade, potentially making an already "critical" nursing shortage worse. Many organizations are working to recruit more men and minorities to fill those positions. The American Assembly for Men in Nursing, for instance, hopes to increase the share of male nurses by 20 percent nationally by the year 2020.

But while efforts to normalize male nursing are growing, a study published recently in the academic journal Gender & Society suggests those efforts are anything but gender-neutral. Study author and University of North Carolina researcher Marci Cottingham reviewed marketing materials designed to recruit more men to nursing and found that organizations "mobilize masculinities" in their messaging. Rather than emphasizing the caring behaviors often associated with the field, materials drew on "tough, detached, and independent" language and imagery traditionally associated with men. She referred to the trend as an "ideological gendering practice."

How are recruiting efforts masculinized? The Society Pages pointed to an early 2000s poster asking readers if they were "man enough to nurse" and another, more recent campaign called "Adrenaline Rush" that likened the thrill of helping patients with that of snow skiing. In an article he penned for Minority Nurse, nurse Don Anderson said these types of efforts countered those to "de-genderify" the nursing industry by focusing on preconceived gender traits rather than personal strengths or interest. He said that the "ability to care, empathize, and nurture" are not "female-only personality traits."

Though Cottingham's research suggests male stereotypes remain ever prevalent in recruiting efforts, The Society Pages reported that not all campaigns are guilty of this tactic. A recent video produced by Johnson & Johnson titled "Name Game," for instance, portrayed a male nurse as empathetic and emotionally competent rather than stoic or aloof.