Regular Exercise May Boost Your Pay 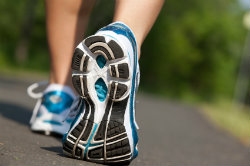 Education or career skills may not be the only way to gain a bump in pay. A new study released this month in the Journal of Labor Research reveals that being in shape -- exercising, in essence -- could lead to higher pay.

Kosteas' study, called "The Effect of Exercise on Earnings," is not the first to examine possible connections between exercise and pay, as Time Moneyland notes. However, it has been difficult to prove direct causation between the two considering those who go to the gym could simply be more disciplined. This is why Kosteas took specific steps in his study to compare individuals who were similar in age, education and high school sports background.

"While there has been a recent surge of interest by economists on the issue of obesity, relatively little attention has been given to the economic effects of regular physical activity apart from its impact on body composition," Kosteas said in the abstract.

A 2007 study showed similar results to Kosteas' study, but along slightly different lines, notes Time Moneyland. That study, "Gender, Body Mass, and Socioeconomic Status" showed that obese women earned an average 18 percent less compared with those who weren't obese and that, in general, overweight women had 25 percent less family income.

In his study, Kosteas defined exercise as: aerobics, cycling, running and swimming. SmartMoney notes that exercise can be advantageous because it boosts mental levels and energy and it could be these attributes that make employees more valuable to companies. However, SmartMoney also notes that exercise is no guarantee of a pay raise. Still, it could reap other rewards such as reduced health care costs or even the opportunity to stay active longer as one ages.

Several articles note that the potential benefits of exercise could be worth the cost of a gym membership alone.

SmartMoney pointed out that Kosteas himself exercises, lifting weights on a regular basis; it also noted that Kosteas received a promotion and pay raise two year ago.

"The Effect of Exercise on Earnings," springerlink.com, Vasilios Kosteas