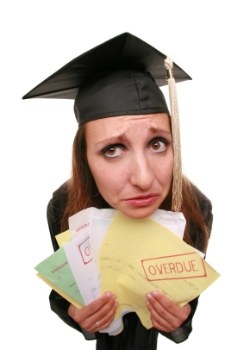 A new report from the Federal Reserve Bank of New York shows that the extent of student loan debt is greater than previously believed.

According to the report, the outstanding balance on student loans has now reached $870 billion. This is more than the total credit card balance, which now stands at $693 billion, and the total auto loan balance, which is $730 billion. In addition, the report said that as many as 1 in 4 borrowers have past due student loan balances -- far more than previously reported.

W. Norton Grubb, a professor at UC Berkeley's School of Education, told the Los Angeles Times that he is concerned that rising debt levels are forcing some students to drop out. He noted that only 40 to 50 percent of those enrolled at California State University schools complete their degrees.

He added that student debt may even be pushing some graduates to enter fields that pay well, rather than considering jobs that interest them. "The debt levels are distorting what fields people are taking on," he said.

The Federal Reserve report also noted that student debt does not just affect the young. "Parents and the federal government shoulder a substantial part of the postsecondary education bill," wrote the authors. Indeed, nearly a third of borrowers are ages 30 to 39, and over 16 percent are ages 40 to 49.

Experts have pointed out that the impact of student loan debt is far-reaching. For example, an article in Bloomberg Businessweek explained that student loan debt is negatively affecting home sales: Because so many graduates are saddled with debt, they cannot qualify for mortgages.

According to the National Association of Realtors, people ages 25 to 34 made up just 27 percent of all home buyers in 2011 -- the lowest share in the past decade. "Students coming out of college are burdened with more debt than traditionally they have been," explained Rick Palacios, a senior research analyst at John Burns Real Estate Consulting in Irvine, California, who was quoted by Bloomberg Businessweek. "And they are also coming into an economy that is underperforming previous recoveries."

Christian deRetis, an economist for Moody's Analytics, noted that high student loan debt could have an even greater negative effect on the economy. "Even if borrowers could service their debt," he told CNN Money, "it means they might not start as many businesses, buy as many homes or buy as many automobiles."

"The Next Crisis to Avoid is in Student Loans," finance.fortune.cnn.com, March 6, 2012, Nin-Hai Tseng