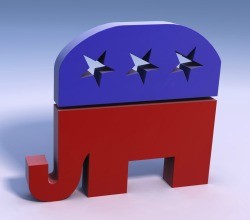 A recent study conducted by the College Republican National Committee (CRNC) not only confirmed that the GOP does not appeal to the majority of young voters, but also revealed why.

Losing the youth vote has become a trend for the GOP. Bloomberg noted that Republicans have lost the youth vote in the past three presidential elections, and, as CNN revealed, those losses have been fairly significant. In 2008, Obama won the youth vote 66 to 32 percent, and in the most recent election, he won 60 to 37 percent.

The CRNC study came as a follow-up to Obama's 2012 win. As Politico noted, the report detailing the study's results is based on two national surveys of 800 registered voters between 18 and 29 years of age and on six focus groups of young individuals. Focus group members consisted of Asian Americans, Hispanics, economically-struggling men, single women, and hopeful entrepreneurs in Florida, California, and Ohio who had voted for Obama but were considered "winnable" for Republicans.

The report, titled "Grand Old Party for a Brand New Generation," condemned the GOP on its failed attempts at outreach and messaging and apparent single-mindedness on cutting taxes and reducing big government. Additionally, the report revealed an overall negative image of the Republican Party. Words that swing voters often associated with the party included "rigid," "racist," "old-fashioned," and "closed-minded."

The report also analyzed how Republicans fared on specific issues important to young voters. For example, as Bloomberg stated, polling revealed that 26 percent of voters not only support same-sex marriage but also would not vote for a candidate who is against it, even if they agreed with the candidate on a majority of other issues.

In terms of abortion and immigration, most participants actually agreed with Republicans. 51 percent of surveyed individuals believed that abortion should be either completely banned or allowed only in certain situations. 65 percent supported deporting illegal immigrants, upholding current immigration laws before providing an opportunity to gain legal status, or offering legal status but not citizenship. Despite these similarities in views, Politico revealed that the GOP is still portrayed negatively on these issues. In terms of abortion, the report explained, "the Republican Party has been painted -- both by Democrats and by unhelpful voices in our own ranks -- in holding the most extreme anti-positions." As for immigration, Republicans were advised to recognize "the difference between legal and illegal immigrants and to also differentiate illegal immigrants from the children of illegal immigrants."

Perhaps the most important issue for young voters, Bloomberg revealed, is the economy. Most young voters believe that the Republican Party's policies played a large part in causing the recession. Additionally, these voters are happy that President Obama is at the very least trying to improve the economy, reform health care, and lower their debt obligations, with "trying" being the most-often used word to describe the President among supporting young voters.

Politico revealed that while Republicans did bring up jobs and the economy throughout the last election, young voters did not like the party's presentation of the issues. "…[O]ur focus on taxation and business issues has left many young voters thinking they will only reap the benefits of Republican policies if they become wealthy or rise to the top of a big business. We've become the party that will pat you on your back when you make it but won't offer you a hand to help you get there."

Student loans are currently an issue that is especially relevant to these voters -- an issue that the youth thinks Democrats are doing more to resolve. As one focus group member stated, "I think they're more in tune to what we need right now with student loans, getting a job, fixing the housing market and the environment."

The report suggested that to improve their appeal to young voters on economic issues, Republicans must better convey how their policies could help the economy both on a national and an individual level and do so in a more "caring" way. "If we don't believe that Republicans are the 'fend for yourself' party, then it's time for us to explain why -- and to show our work. This will go a long way overall, but particularly with Latino voters, who tend to think the GOP couldn't care less about them."

Finally, one major propeller to the damaged GOP image is, as the report revealed, the "outrageous statements made by errant Republican voices," including Romney's "infamous '47 percent' remarks" in the last presidential race. Alex Smith, National Chair of the CRNC, mentioned that the report emphasized that "the rhetoric and the language of acceptance has to be a part of our strategy going forward."

Better communication was an omnipresent theme throughout the report. Alex Schriver, co-author of the report, reinforced this theme in his statement regarding the study's results: "As we sat in those six focus groups, they would continually say they agree with policies we know we hold, but they didn't equate those policies with the Republican Party. That's really one of the biggest takeaways of this document…We need to do a better job communicating. It boils down to dorm-room issues, how policies we are promoting are going to affect young people today."