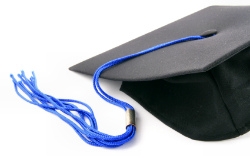 A report released this week found that the United States' global ranking in college completion for young adults has slipped.

According to the report from the Organization for Economic Cooperation and Development, the country has fallen from 12th to 16th in the number of adults ages 25 to 34 who hold degrees. The United States trails countries such as South Korea, Canada and Japan.

As The Washington Post reported, part of the reason that America lags in the rankings is because Asia and Europe are rapidly expanding college attendance, and because the United States pushes for four-year degrees while other nations focus more on one- and two-year degrees.

"Most of these countries are moving ahead," noted Jamie Merisotis, chief executive of the Lumina Foundation, who was quoted by the Post. "And we are stuck in neutral."

Two years ago, President Barack Obama promised that the United States would lead the world in college completion by 2020, and he repeated that goal often. "We can retake the lead," Obama said in a speech to the University of Texas in August 2010, as reported by ABC News. "The single most important thing we can do is to make sure we've got a world-class education system for everybody. That is a prerequisite for prosperity."

The Post noted that at the time, the college attainment rate for young adults, which was based on 2006 data, stood at 39 percent. This week's report was based on 2009 data, and indicated that the rate had risen to 41 percent. However, the rate of other countries inched up as well. In South Korea, for example, which ranks number one in the world, the rate inched up to 63 percent.

"We don't have any evidence that anything is getting worse in the United States," noted Andreas Schleicher, who leads the Indicators and Analysis Division of the OECD in Paris and was quoted by the Post. "It is just that there is a great deal of dynamism all over the world, and many countries are catching up."

Overall, however, the United States looks much better when considering the entire adult population: In fact, the United States still has the largest percentage in the world of people with college degrees--26 percent. But because less young American adults are completing degrees, other nations are catching up.

As reported by The Christian Science Monitor, the cost of higher education in the United States was a major factor cited by the OECD as to why less young adults are completing college.

"When you have high levels of tuition, you need to ensure that students have really good access to public loans," remarked Schleicher, who was quoted by the Monitor, adding that access to loans in the United States is only considered "reasonable."