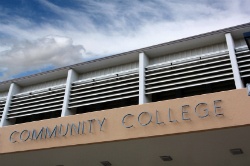 A report released in December by the American Association of Community Colleges found that national enrollment in community colleges decreased slightly last year.

The report, which was based on estimates by the AACC and the National Student Clearinghouse, found that total enrollment at community colleges dropped nearly 1 percent to 8.3 million. But as The Chronicle of Higher Education reported, the slight decline followed three years of surging enrollment due to the economic downturn. Thus, despite the decrease, last year's total enrollment figure was still 22 percent higher than in 2007.

It's not that enrollment is down, pointed out Kent Phillippe, a senior research associate for the AACC, who was quoted by Inside Higher Ed. "It has essentially stopped growing."

According to the association, last year's drop in enrollment was because of a decline in full-time students. The number of part-time students, meanwhile, rose slightly.

"The rapid enrollment rates we saw over the last four years may have slowed, but the community college system continues to operate at a higher tempo today than it did four years ago," said Walter G. Bumphus, president and CEO of the association, in a statement. "Now is the time for colleges to step back and re-evaluate their systems, seek innovative solutions and plan for the future."

Bumphus also noted that the slowing of enrollment will likely be welcomed at many community colleges, because in recent years the surge in students strained budgets as well as classroom space. "When rising enrollments maxed out their classrooms and swamped their registration systems, community colleges had to be creative and find solutions," he said in a statement.

As Inside Higher Ed pointed out, the report did not offer reasons as to why community college enrollment has dropped. That's because the change can be attributed to many factors, such as demographic shifts, state budget cuts and high unemployment rates.

The association did note, however, that the decrease in community college enrollment appears to be unrelated to any economic improvement. As proof, it noted that the proportion of community college students receiving Pell Grants rose by 17 percent between the first quarters of 2010 and 2011, from just over 1.7 million students to a total of more than 2 million students. Community colleges enrolled just over one-third of all Pell Grant recipients during the first quarter of 2011--3 percent higher than during the same period last year.