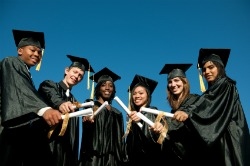 A new report has found that over the last two decades, the number of students earning certificates and degrees from community colleges has increased dramatically.

The report, titled "The Road Ahead: A Look at Trends in the Educational Attainment of Community College Students," was released yesterday by the American Association of Community Colleges. As The Chronicle of Higher Education reported, the policy brief found that the percentage of degrees and certificates awarded grew at twice the rate of enrollment between 1989 and 2010: Students earned 127 percent more credentials, at the same time that enrollment increased by 65 percent.

The growth was particularly pronounced among minority groups earning degrees and certificates. Hispanic students, for example, earned more than four times the number of credentials at the same time that their numbers doubled at community colleges. In addition, credential attainment among African-American students increased 283 percent during that time.

"One extremely positive conclusion can be reached," noted the report. "Educational attainment for all key populations is increasing at community colleges."

According to The Chronicle of Higher Education, enrollment at community colleges has surged in the past three years from 10.6 million to 12 million. Although completion rates have improved, the report acknowledges that more needs to be done to ensure that students graduate and earn credentials.

The favorable report from AACC comes just after a study released last month from the nonprofit Complete College America found that college completion remains a pressing issue: Among its disturbing findings were that just over half of students who enrolled full-time in four-year public bachelor's degree programs finished in six years. In addition, less than three out of ten students enrolled full-time in associate degree programs completed within three years. For part-time students, the picture was even bleaker, with the vast majority never completing college at all.

Kay McClenney, director of the Center for Community College Student Engagement, noted in Inside Higher Ed that the report is "significant and important," because it shows that community colleges are trying to improve college completion. But she added that more work clearly needs to be done to improve completion rates.

"We're not where we need to be," she told Inside Higher Ed. "So let's not forget that in the celebration."

Christopher M. Mullin, program director for policy analysis at AACC and the report's author, agreed. "I don't think that this signals that the game is over by any means," he said in an interview quoted by Inside Higher Ed.

"The Road Ahead: A Look at Trends in the Educational Attainment of Community College Students," aacc.nche.edu, Christopher M. Mullin, October 2011