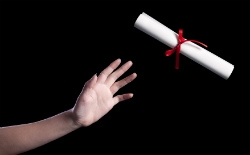 Georgetown University Center on Education and the Workforce released a new report showing that the United States is not producing enough college-educated workers to meet economic needs and reduce income inequality.

As reported by The Chronicle of Higher Education, the report, by Anthony P. Carnevale and Stephen J. Rose, found that the nation has been producing too few college-educated workers for more than three decades. Furthermore, it looked at the pay difference between college graduates and high school graduates (called the "wage premium") and argued that if the nation continues to underproduce college graduates, the gap in earnings among Americans of different educational attainment levels will only get worse.

"The data are clear," said Carnevale in a press release. "The demand for college-educated workers is growing much faster than the supply... We are hurtling into a future dominated by college-level jobs, unprepared."

The report called for an additional 20 million postsecondary-educated workers by 2025, including 15 million workers with a bachelor's degree, four million workers with non-degree postsecondary credentials and one million with associate's degrees. Moreover, it noted that increasing the number of college-educated workers will help boost wages for workers of all education attainment levels. Carnevale and his team argued that the additional college graduates could come from the half million high school graduates per year who are in the top half of their class yet do not pursue postsecondary education.

According to Inside Higher Ed, the report claimed that currently, the number of college-education Americans is growing by just one percent a year. If the nation continues at this rate, just eight million additional postsecondary-educated Americans will be produced by 2025 and the wage premium will go up to 96 percent (today, the wage premium is 74 percent).

In order to avoid such a fate, the country will need to increase the number of collegebound Americans so that the rate of educated workers goes up 2.6 percent a year. This would reduce the wage premium to 46 percent as well as increase the gross domestic product by $500 billion.

The authors acknowledged that this goal will be difficult as slow economic recovery, which has caused severe budget cuts to higher education and student aid, combined with sky-high tuition rates has made college unattainable for many students and families. Additionally, some have questioned the value of higher education as so many of America's bachelor degree recipients are unemployed.

Carnevale argued that there are two ways to reach the 20 million goal--by providing more money to students and/or institutions or by increasing efficiency in the higher education system. Some, however, pointed out that simply increasing college attainment will not necessarily solve the problem of having too few educated workers.

Andrew Gillen of the Center for College Affordability and Productivity, told Inside Higher Ed via email, "...increasing college attainment will only boost growth if it increases cognitive skills, and recent research has questioned just how much college boosts cognitive skills. The main takeaway is that if you are worried about growth, the focus should be on quality rather than quantity."