Report Shows ADA Compliance Is An Issue For Online Education 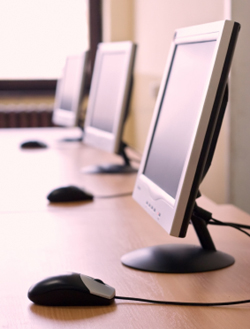 According to a report conducted by the Campus Computing Project and the Western Cooperative for Educational Telecommunications, colleges and universities may face complaints or litigation about accessibility issues for online courses.

As a press release reported, 183 two- and four-year colleges and universities were surveyed. Data showed that many schools do not have sufficient policies and procedures in place to ensure that their online courses are compliant with the Americans With Disabilities Act (ADA). Specifically, 34 percent of campuses reported relying on individual faculty members to accommodate students with disabilities; 24 percent assigned the responsibility to academic programs or departments; 17 percent reported having no institutional policy or procedure for ADA compliance. Only 16 percent said their institution had a central office that examined each online course for compliance.

Kenneth C. Green, director of the Campus Computing Project, told Inside Higher Ed that the lack of a centralized compliance office suggests that students with disabilities are not being taken care of. "There's a lot of 'ad-hockery' about ADA compliance. And ad-hockery makes you vulnerable," he explained. As The Chronicle of Higher Education pointed out, this ad hoc approach can lead to a lawsuit similar to the case in which Arizona State University was sued over its use of the Kindle e-reader, which was a device that could not be used by blind students.

Ron Stewart, a technical adviser to the advocacy group AHEAD agreed and added that a majority of U.S. institutions are at risk because of a total disregard for accessibility requirements in their technology. He told Inside Higher Ed, "Based on my own professional experience in working with many institutions it would be my estimate that over 80 percent of the software and technology-mediated systems used on today's campuses present profound access challenges."

The survey also revealed that despite the recent push for online education, the biggest factor that holds institutions back from expanding their online programs is a lack of instructor support and personnel.

"If you think about barriers to expansion, people in the past have said they're contained--that other people won't let them do it, when in fact the data show that the barriers are internal," said Green.

Additionally, while virtual classrooms are less expensive than building new lecture halls and dorms to accommodate more students, the infrastructure for online education is still costly, noted Green. Therefore, online expansions depend not only on internal support, but also how much money an institution has.