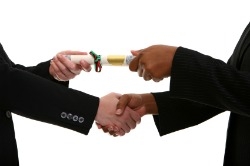 A new report has found that postsecondary certificates are the fastest-growing form of credential in the country.

The report, "Certificates: Gateway to Gainful Employment and College Degrees," comes from the Center on Education and the Workforce at Georgetown University. It found that in 2010, certificates made up 22 percent of awarded credentials. In 1980, by contrast, that figure was just 6 percent.

"We are developing a very American version of the European system" for vocational training, said Anthony P. Carnevale, director of the Center on Education and the Workforce and the lead author of the report, who was interviewed by The New York Times.

Carnevale added that certificates are particularly appealing to students who struggle academically. He noted that the programs allow such students to gain "sufficient skills to give them jobs above what they would normally get based on their educational achievement."

As reported by The Chronicle of Higher Education, the study found that the most common occupations of certificate holders are business/office work, transportation, healthcare, and metal working. The states that produce the most certificates on a per-capita basis are Louisiana, Georgia, Arizona, and Florida. States producing the fewest are New Hampshire, Maine, Montana, Vermont, and Hawaii.

Inside Higher Ed pointed out that the most surprising finding of the study is that one-third of certificate holders also have an associate, bachelor's, or graduate degree. The large percentage suggests that workers are earning certificates to update or learn new skills in a difficult job market.

"The advice to women is you better get past a certificate," said Carnevale, who was quoted by the Times.