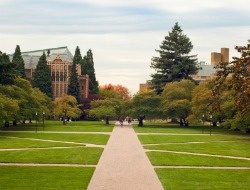 A recent study from the University of Pennsylvania shows that public educators in the state of Washington may be failing to sufficiently support students so that they graduate from college.

The study indicates that the state has a "disjointed" higher education system that is not producing an adequate number of graduates to fill high-demand, high-tech fields, according to the Yakima-Herald. The report also indicates there is a "misalignment" between high school graduation requirements and those for college admissions, as well as an absence of priorities when it comes to higher education policy, stated a press release.

According to the study, Washington state does not produce as many bachelor's-degree graduates per capita as other states and only 40 of every 100 students who enter high school start college four years later "on time." Also telling is that a full quarter of adults aged 18 to 64 in the state lack a high school diploma.

"When it comes to higher education, what Washington needs from its policy makers is a set of clear goals and an ambitious agenda to help more citizens get the college degrees required to compete for jobs in the state's high-tech economy," said Joni Finney, one of the researchers from Penn's Institute for Research on Higher Education, in the press release. "What it's getting instead is an abdication of leadership and steep tuition increases that threaten to end the dream of a college education for thousands of Washingtonians."

Moreover, the study found that college tuition in Washington has increased nearly 40 percent or above at all public institutions from 1999 to 2009 while median family income declined, noted The Seattle Times. The report also stated that nearly 70 percent of all jobs in the state will need employees with some type of postsecondary education by 2018.

"It's a very useful, powerful analysis that arrives at exactly the right time," State Representative Larry Seaquist, who chairs the House Higher Education Committee, said to The Seattle Times.

The report puts most of the blame on current Washington State Governor Chris Gregoire and state legislators for a lack of leadership, according to the Yakima-Herald.

However, Gregoire is trying to make improvements by replacing the Higher Education Coordinating Board with a new Office of Student Achievement, an announcement Gov. Gregoire made Tuesday in his State of the State address. The goal of the new office would be to help prepare high school graduates for college, the Yakima Herald reported.

Several members of the higher education system in Washington said the University of Pennsylvania report might have been overreaching in its analysis, especially in light of the recent recession, according to The Seattle Times. Some argued that recent financial resources might not have been the same as they were six to eight years ago.

"I'm not sure [the authors] completely grasp how hard-hit this state was," said William Zumeta, a University of Washington professor, to The Seattle Times.