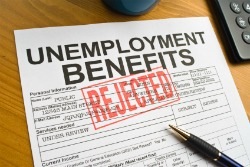 Despite the unemployment rate hovering at 9.2 percent, a report showed that several states have drastically cut unemployment insurance benefits as funds face insolvency.

According to a press release, the report, called "Unraveling the Unemployment Insurance Lifeline" and released by the National Employment Law Project, showed that 10 states made "unprecedented" cuts and new restrictions in their unemployment benefit programs. Furthermore, the most severe cuts took place in states that were hit hardest by the recession.

"It's disconcerting that these lawmakers would expend so much energy making cuts to state unemployment insurance programs when more people are out of work for longer than any other period on record," said Christine Owens, executive director of the National Employment Law Project.

As Reuters reported, six states shortened the number of weeks the unemployed can received jobless benefits. Michigan, Missouri and South Carolina, for example, all cut their benefits down to 20 weeks. Florida made the most drastic changes--beginning January, unemployment insurance benefits will be available on a sliding scale, depending on the state's unemployment rate, with the maximum at 23 weeks. For half a century, states have offered at least 26 weeks of state benefits.

While these states slashed benefits, others tightened eligibility requirements or altered the formula for determining the amount of weekly payments. Indiana, for instance, went from basing insurance payments on a worker's highest quarter earnings to the average of four quarters, reported the Los Angeles Times. As a result, the state's average weekly benefits dropped to $220 from $283.

In addition to cutting the duration of jobless benefits, Florida also implemented new eligibility requirements, noted the press release. Starting in August, claimants in the state will need to complete a 45-question online skills-assessment in order to receive their first payment. In order to receive future weekly payments, claimants must prove that they are looking for work, by providing documentation that they reached out to at least five prospective employers each week.

Owens criticized lawmakers' decisions, arguing that the changes are not helpful and do not make sense.

"Far too many state lawmakers have taken the easy out of cutting workers' unemployment insurance benefits... Instead of enacting policies to create good jobs and restore their unemployment insurance systems to solvency by adequately financing them, these state lawmakers are choosing to make the unemployed jump through hoops of red tape," said Owens.

Meanwhile, the Los Angeles Times pointed out that Colorado and Rhode Island took a different approach--these states were the only ones to address the solvency issue by adopting measures to increase program funding.

According to the press release, Owens concluded that without federal intervention, "we run the risk that state unemployment insurance programs will no longer be able to fulfill their primary purposes--helping unemployed workers subsist as they search for work, and injecting ballast into the economy to promote consumer spending and growth, at a time when it desperately needs it."