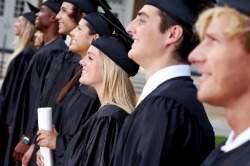 The drop-out rates at some of the nation's high schools that have been dubbed 'dropout factories' appear to be decreasing, bringing hope that the U.S. is moving toward its goal of ensuring more students graduate from high school.

A report called "Building a Grad Nation" shows that some U.S. states are moving in the right direction when it comes to increasing high school graduation rates. However, the report, sponsored by a broad consortium of groups including Civic Enterprise, the Everyone Graduates Center, America's Promise Alliance and the Alliance for Excellent Education, also indicated that "hurdles" still exist in many states, reported PBS.

The nation's dropout factories, defined as high schools that graduate 60 percent or less of students on time, decreased from 1,634 schools to 1,550 between 2009 and 2010, according to CNN. Over the long term -- between 2002 and 2010 -- the number of schools considered to be dropout factories decreased by more than 450 in count with much of the improvement occurring after 2008, according to America's Promise Alliance.

"The number of kids attending these dropout factories is down by one-third, and that points to progress that states have made in reforming schools, closing them or giving kids other options," Robert Balfanz, director of the Everyone Graduates Center at Johns Hopkins University, said in The Washington Post.

This is significant as CNN indicated that the Grad National campaign has set a benchmark of having 90 percent of students graduate by 2020. However, there is work to be done as just one out of 50 states has reached that goal: Wisconsin, although Vermont is not far behind. Additionally, it's said that approximately 25 percent of U.S. students do not graduate from high school.

"The good news is that some states have made improvements in their graduation rates, showing it can be done," Balfanz said in CNN. "But the data also indicate that if we are to meet our national goals by 2020, we will have to accelerate our rate of progress, particularly in the states that have shown little progress."

Overall, most of the improvement in the dropout rates occurred in the south or in suburban areas, according to America's Promise Alliance. In fact, nine states -- Alabama, Florida, Georgia, Kentucky, New York, North Carolina, South Carolina, Tennessee and Texas -- showed the biggest decline in dropout factories, noted The Washington Post.

The report also revealed that nearly 92 percent of Asian students graduate from high school on time while 82 percent of whites do. Compare this to less than 66 percent for Hispanics and less than 64 percent for African-Americans.

The report also indicated that those who graduate from high school can have a long-term positive effect on the economy compared with those who do not: keeping just one student in high school through to senior graduation could result in some $200,000 in increased tax revenue over that person's life, pointed out The Washington Post.

Overall, while the progress appears to be positive, more work needs to be done: if advancement continues at the current pace, it is estimated that the U.S. will fall 10 percent short of graduating 90 percent of all students by 2020.

"We have continued to make good progress, but we also have much work ahead to achieve our goal of a 90 percent high school graduation rate," Former Secretary of State Colin Powell and his wife Alma Powell, both now head of America's Promise Alliance, were quoted in The Washington Post as saying.