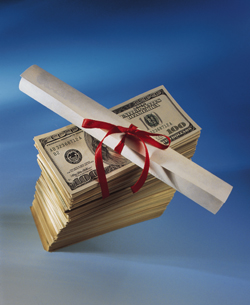 A longtime congresswoman is under fire for awarding thousands of dollars in scholarship money to family members as well as relatives of an aide, reported The New York Times.

Representative Eddie Bernice Johnson gave 23 scholarships totaling $25,000 to two of her grandsons, two of her great-nephews and to an aide's son and daughter over the last five years. Rep. Johnson is former chairwoman of the Congressional Black Caucus and former board member of the Congressional Black Caucus Foundation, stated CNN. The nonprofit foundation grants every member $10,000 every year to award as scholarships to students in each member's district to promote the advancement of African Americans in higher education. The Congressional Black Caucus Foundation's rules state that scholarship applicants must attend school in the district of the caucus member and cannot be related to anyone affiliated with the caucus. The New York Times added that although the foundation sets the rules, each member decides how to award the money.

According to The Wall Street Journal, Rep. Johnson represents part of central and southern Dallas, where 86 percent of the student body is low income. Many students in the area would have been eligible for the scholarships, but Sylvia Lopez, director of counseling services for the Dallas Independent School District, said that she had no idea such a scholarship existed as no one had ever contacted her office about it.

The Wall Street Journal noted that the foundation also requires students to sign a statement verifying that they are eligible for the scholarship, which includes stating that they are not related to anyone affiliated with the caucus. Some argued that this is not enough. "There should be a system of checks and balances to make sure that applicants are being truthful and also that the process is fair," said Patricia Harned, president of the Ethics Resource Center.

Cooper assured CNN that the foundation's board members would carefully examine the situation and would also review previous applications to ensure that students do indeed meet the qualifications.

Stephen Broden, the congresswoman's Republican opponent, has already seized the opportunity to use this incident as a means to gain voter support, stated The Wall Street Journal. "What this reflects is that after being 18 years in Washington D.C., sometimes we think we can make decisions that are above the law, above the rules," he said.

Political experts, however, said the congresswoman's constituents will most likely continue to support her. Cal Jillson, a political scientist at Southern Methodist University explained, "The problem is Eddie Bernice Johnson represents a poor minority district where there are a lot of people for whom a little bit helps."