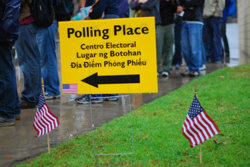 After a long history of trying to get young adults out to vote, some states are now trying to restrict college students from voting.

According to Campus Progress, New Hampshire House Republicans are pushing for laws that would "tighten up the definition of a New Hampshire resident", which would strip many out-of-state college students of their right to vote. As The Washington Post reported, one bill would allow students to vote in their college town only if they or their parents had previously established permanent residency there. Another proposed bill would eliminate Election Day registration, which typically produces a higher turnout of young voters.

House Speaker William O'Brien made it clear that he thought these laws were necessary, arguing that students lack the "life experience" needed in order to make a meaningful vote.

"Voting as a liberal. That's what kids do," said O'Brien in a video recorded by a state Democratic Party staffer and recently posted on YouTube. Furthermore, he said college students are "foolish" and "just vote their feelings."

Campus Progress pointed out that New Hampshire is not the only state trying to pass laws that would limit student voting. In Wisconsin, Governor Scott Walker and conservative representatives proposed a law that would prohibit college students from using in-state college IDs as proof of residency when voting. If the bill is passed, it would be one of the strictest voter registration laws in the U.S. and would pose significant barriers for student voters.

According to Inside Higher Ed, students across the nation are speaking out against these proposed bills. Campus Progress noted that even Republican students disagree with the legislation.

"The way I see the lines here, is we are students and first and foremost. As students, this is attacking our right to vote," said Richard Sunderland, president of the College Republicans at Dartmouth College. Sunderland argued that the GOP should focus on bringing "younger students into the fold as Republicans, as opposed to this, which seems like more of an attack."

Supporters of the proposed voting measures argued that it would safeguard against voter fraud and, therefore, help restore confidence in the voting system, reported The Washington Post. Democrats, on the other hand, say there is little evidence showing that voter fraud is an issue and that the legislation is a tactic to deflate young voters, the power of core Democratic voting blocs, whose turnout helped Obama win in 2008. Furthermore, Democrats criticized the measure, saying if passed it would cost states millions of dollars to enforce.

According to Inside Higher Ed, New Hampshire and Wisconsin were among the states that had the highest youth-voter turnout; however, that would change in 2012 if these laws pass.