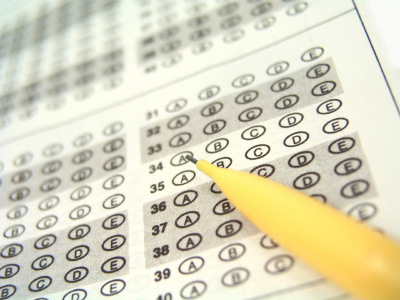 New research claims that the SAT favors wealthy over disadvantaged students, and white over black students.

A new book, entitled "Rewarding Strivers: Helping Low-Income Students Succeed in College," relates that socioeconomic factors, such as parents' education and income, greatly affect SAT scores: The most disadvantaged students score an average of 784 points lower than those from more affluent and educated families. Consequently, the book proposes that colleges and universities should adopt affirmative-action policies based on socioeconomic status.

"It doesn't do any good to offer a generous financial aid package to low-income students if you don't also admit them," noted Richard Kahlenberg, who edited the book and was quoted by USA Today. Kahlenberg is a senior fellow at the Century Foundation, which published the report.

Even though the research concentrates on the effect of socioeconomic status, race wasn't entirely discounted: Inside Higher Ed notes that Carnevale said that while he and Strohl "tried mightily to find a way to replace race with various measures of income class," being black still amounted to an SAT penalty of 56 points. The researchers realized that "no matter what we did, we couldn't erase the stain of race" entirely.

In fact, race's effect on SAT scores is the subject of an article in the latest issue of the Harvard Educational Review, which claims that "the SAT, a high-stakes test with significant consequences for the educational opportunities available to young people in the United States, favors one ethnic group over another."

"The confirmation of unfair test results throws into question the validity of the test and, consequently, all decisions based on its results," said Maria Veronica Santelices of the Catholic University of Chile and Mark Wilson of the University of California Berkeley, who authored the article. "All admissions decisions based exclusively or predominantly on SAT performance--and therefore access to higher education institutions and subsequent job placement and professional success--appear to be biased against the African American minority group and could be exposed to legal challenge."

The Washington Post reports that Laurence Bunin, vice president in charge of the SAT at the College Board, said that the study is "fundamentally flawed," and that the conclusions were "wrong and irresponsible and a disservice to students, parents and colleges."