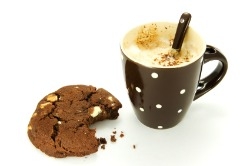 It turns out that chocolate and coffee can be much more than just that answer to a craving or that need for a wake-up jolt. A recent study shows that for many workers, chocolate and caffeine are the answer to office boredom, according to HealthDay.

The study, done by researcher Sandi Mann of the University of Central Lancashire in the United Kingdom, surveyed 102 workers about their habits at work, reported LiveScience. Workers were also asked to gauge their level of boredom on a five-point scale. Some 25 percent of respondents revealed they were bored the majority of the time.

The report also indicated that in addition to turning to chocolate and coffee to help decrease the impact of boredom, some said they were more likely to consume alcohol after a boring day at the office.

However, bored workers can develop habits that lead to more than merely a fondness for chocolate, coffee, and alcohol. These "chronically bored" workers often have more of a desire to leave their current job and may be more likely to engage in behaviors that could be described as risk-taking -- just for the opportunity to experience stimulation on the job.

"At work people vandalize, steal, and sabotage just because they are bored and looking for extra stimulation," Mann told LiveScience.

Another 80 percent of respondents indicated that boredom on the job caused them to lose concentration and more than 50 percent said boredom led to mistakes. The study also found that some people are more prone to experiencing boredom at work than others. Nonetheless, the reason is usually the same.

"My analysis of the results suggest that the most significant cause of office boredom is an undemanding workload," Mann was quoted in the Examiner as saying. "So managers should look at ways of reducing sources of workplace boredom and at encouraging healthier ways of coping."

For instance, Mann suggested employers provide enrichment programs that could entail job rotation, empowerment and what she described as "multi-skilling", reported LiveScience.

BusinessNewsDaily also offered a number of ways to fight boredom at the office. For example, you can change your work routine by moving your office hours around or making calls, instead of responding to e-mails first thing in the morning. Try changing your attitude--instead of harboring feelings of ill will toward the same activities you do day-to-day, think of your efforts as the little steps that chip away at an overall goal. Or instead of beating around the bush when it comes time to start on a large project, start early and dedicate yourself to just five minutes a day. You may find that the project is not as overwhelming as it might have seemed and you'll begin the chipping-away process.

While these solutions might help to alleviate boredom and other related feelings on the job, they also show that employees can take steps toward self empowerment. These might be better solutions than seeking out that piece of chocolate or downing that additional cup of coffee or alcohol after work.

"Be Happier and Healthier at Work: 10 Strategies to Try," businessnewsdaily.com, February 7, 2011