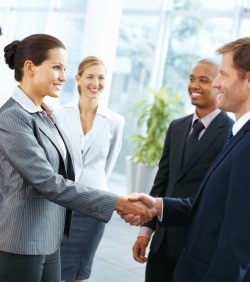 The recession was a chance for some individuals to take a risk and start their own ventures, or in some cases, this was the only employment option available. A study conducted by researchers in the UK, however, shows that entrepreneurs and others who are self-employed may have a difficult time re-entering the corporate world.

The Wall Street Journal reported that researchers from Erasmus University in Rotterdam, the University of Vienna and the Munich School of Management conducted a two-year experiment to assess how self-employed job seekers fared against job seekers who had a full-time corporate job. Researchers applied to nearly 100 real job postings for human resource positions in the UK with pairs of fake resumes and cover letters. The two applications were identical, with just one exception -- one resume noted that the applicant was self-employed as an independent HR consultant, while the other resume showed that the applicant held a traditional role in a corporate HR department.

Responses, or rather lack of responses, showed that self-employed candidates were less likely to move forward in the interview process for corporate jobs. The self-employed applicant group received 63 percent fewer positive responses such as inquiries about salary expectations. Interestingly, men were especially hard-hit compared to women for taking the self-employed route, though it was unclear why this was the case.

Though researchers did not look into the reasons behind this bias, one could draw many possible conclusions. Quartz noted that Philip Koellinger, an associate professor of economics and entrepreneurship at Erasmus University and one of the study's authors, speculated that cultural fit might be a concern.

"My hunch is that many entrepreneurs would actually not fit very well into established organizations, although they may be very productive and able managers themselves -- as long as they don't have a boss," Koellinger said, as quoted by Quartz.

SmartCompany interviewed several Australian entrepreneurs about why large companies viewed self-employed applicants as less desirable candidates. One self-employed electrical engineer explained, "Somebody with a 'regular' career is just easier to categorise for them, compared to someone who has worked independently."

Some recruiters told SmartCompany that self-employed applicants were too much of a risk. Some worried that entrepreneurs wanted to become their own bosses and do their own thing and that they would not follow business protocol or procedures. Others believed that entrepreneurs were not specialized enough and, therefore, not relevant to what a business needs. Eliza Dawes was self-employed prior to looking for a corporate job in marketing and business development, and she agreed.

"For me, being a business owner, I wore so many different hats… It was hard for me to say, yes, I've worked in marketing for four years, when I did a bit of everything," she told SmartCompany.

Regardless of the reasons, the researchers emphasized that one should think carefully before branching off.

"The choice to become an entrepreneur can result in an involuntary lock-in, a factor that should be taken into account in planning one's future career," wrote the researchers, as quoted by The Wall Street Journal.

"Firms Back Away From Self-Employed," blogs.wsj.com, July 10, 2013, Rachel Emma Silverman