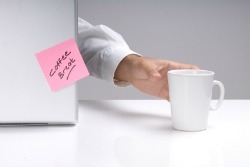 When you are pushing a deadline, conventional wisdom suggests that you immerse yourself in your work until it is finished. Not so, says a growing body of research. In fact, taking time to goof off or relax now and again may actually improve your long-term focus and, in turn, the quality of your work.

According to The New York Times, a growing body of evidence suggests that taking regular breaks from mental tasks boosts creativity and productivity. Forcing yourself to stay on point, on the other hand, can lead to undue stress, exhaustion and, eventually, a decline in work quality.

John P. Trougakos, assistant management professor at the University of Toronto Scarborough and the Rotman School of Management, told The New York Times that mental concentration is similar to a muscle -- it becomes tired after extended use. Much like an athlete in training, your brain needs a rest period between attention bursts to recover.

"The design of the human being is to be a mobile entity," said Dr. James Levine, a professor of medicine at the Mayo Clinic, to The New York Times.

He suggests that workers should take breaks throughout the day to walk around and stretch their legs.

Research agrees. According to Forbes, a team of MIT researchers discovered that call center workers who took breaks to chat with their co-workers got through calls faster, were less stressed and performed just as well as their workhorse peers who did not take breaks. Likewise, Science Daily notes that a 2011 study published in the journal Cognition demonstrated that working for extended periods of time without breaks can actually contribute to a drop in focus and performance quality.

"Constant stimulation is registered by our brains as unimportant, to the point that the brain erases it from our awareness," researcher and University of Illinois psychology professor Alejandro Lleras told Science Daily. "...From a practical standpoint, our research suggests that, when faced with long tasks (such as studying before a final exam or doing your taxes), it is best to impose brief breaks on yourself. Brief mental breaks will actually help you stay focused on your task."

History is on his side. According to Forbes, many of our most creative, productive thoughts come not while working away in our cubicles, but rather outside the office. Advertising specialist Dan Wieden conceived Nike's famous "Just Do It" tag line during his off hours, for instance, and Levine told The New York Times that Albert Einstein allegedly conceived his theory of relativity while riding his bicycle.

But while taking an occasional break can help you in the long run, Trougakos warns against allowing these breathers to become tools for procrastination.

"Anything at an extreme level is not going to be good," he said in The New York Times.