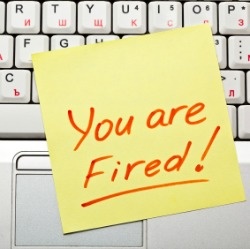 On July 4, the owner of Barducci's Italian Bistro in Winter Park, Fla., notified his 12 workers by text that they were losing their jobs -- at that very moment. Gregory Kennedy wrote, "I unfortunately need to inform you that I have been forced to close Barducci's effective immediately," as CNET reported.

The employees didn't have any advance warning, and the incident may indicate that texting has now created a new low for communicating bad news.

"I think it's immoral," said Jodi Jackson, who worked at the eatery for two years as a cook. "I think it's cowardice."

According to AOL, Kennedy's text did offer a brief explanation about the closure: "Despite my efforts there were circumstances that I was not able to address. I wish you all the best and sincerely thank you for everything you have done. Any final payroll checks will be addressed after the accounting has been finalized."

When the local television station contacted Kennedy for a comment, CNET noted, he responded after some time with this text: "Unfortunately businesses are forced to close across Orlando every day especially in the restaurant sector. I am working to resolve issues quickly including final paychecks as quickly as possible."

As of July 14, the workers hadn't received their final paychecks, according to Jackson, and as reported by the New York Daily News. She also indicated she wanted to be compensated for the "money he's already made from us."

The Barducci's Facebook page and website remain live with no mention of the restaurant having closed, AOL indicated. The Barducci's incident isn't the first, however, in which employees have been fired via text message.

In 2010, Oklahoma-based Arrow Trucking Co. unexpectedly closed, leaving about 900 truck drivers on the road with canceled gas credit cards. The next day, the truckers received two text messages, the first telling them they were fired and the second offering them a bus ticket or $200 in cash to get home, reports AOL. As well, in September of last year, Demos' restaurant in Florence, Ala., reportedly told about 65 employees not to show up for work − via a text message, as reported by AOL.

While messages delivered this way are not the norm - yet, anyway - experts said bosses sometimes deliver bad news electronically to avoid an emotional confrontation. The Society for Human Resources Management advises employers to avoid this practice, as such notifications delivered by text or e-mail may come across as impersonal, make workers feel disrespected and could cause the terminated person to respond with negative emotions or behavior, as reported in AOL.

However, the workers at Barducci's may not be the only ones who had something to lose. Customers who had purchased Groupons to the restaurant were left hanging, too, when they learned of the bistro's closure, the Daily News reported.

"Now I'm thinking about how I'm going to get my money back from that," said Lauren Bartolome, a Groupon customer. "I don't know what to do now."

Groupon indicated, however, that those customers only need contact the deal provider to seek reimbursement.