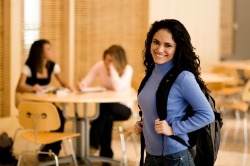 The measure would grant in-state tuition rates to illegal immigrants starting fall 2012. Students must have attended high school in the state for at least three years and received a diploma or equivalent degree, noted the Los Angeles Times.

The measure was approved by the Board of Governors for Higher Education and not the legislative body of the state. According to Reuters, Rhode Island Governor Lincoln Chafee, an Independent, encouraged the board to pass the measure after a delay of some six years in the state legislature. The measure passed September 26 after a public hearing with all present members (11 out of 13) of the board voting in favor of it, according to the LA Times.

"This policy change will improve the intellectual and cultural life of Rhode Island while strengthening our workforce and helping our economy," wrote Chafee in a letter to the board, as reported by the Los Angeles Times.

The board meeting was reportedly heated with both those in support of and against the measure. Terry Gorman, executive director for Rhode Islanders for Immigration Law Enforcement, is one of those who opposed the measure and Reuters reported that Gorman was considering legal action to impede it.

This is why many proponents of such states' acts support the passage of a federal DREAM (Development, Relief and Education for Ailien Minors) Act that would offer legal residency to those pursuing an advanced education and who meet other specific guidelines.

However, there is concern that the new measure won't even hold ground unless backed by the state legislature. Rhode Island is the sole state to have used policy, and not law, to bring about change reported the Providence Journal. For that reason, advocates of the measure hope that legislators will support it by making it law in the future. They also hope that undocumented immigrants will show support by enrolling for college.

"The reason we need to continue in our efforts is it's a tenuous change," Roberto Gonzalez, an immigration lawyer, is reported as saying in the Providence Journal. "I think we need to nail this down with legislation."