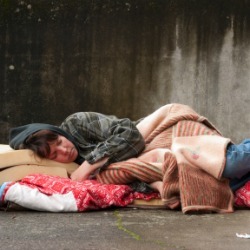 College students have a long tradition of taking on social causes, and one group of students from the South has decided to be innovative as well as altruistic. On March 21, students of Rhodes College, in Memphis, TN, launched The Bridge, the first street newspaper for the homeless created by students. Its goal? To give a too-often-voiceless community a vehicle both to connect with the larger community and help themselves financially.

The Bridge partnered with several Memphis nonprofit and advocacy groups in order to reach members of the homeless community, The Daily News reported. Those who are homeless or who have experienced homelessness write the paper's stories and also submit photos and art for the monthly paper in collaboration with Rhodes student volunteers who serve as the newspaper's staff. Contributors get together to discuss the paper, raising concerns and sharing ideas at monthly meetings.

"There's a huge disconnect between a sheltered population and a homeless population," second-year political science and history major Caroline Ponseti, The Bridge's director of publicity and managing editor, told USA Today, explaining the paper's name. "And we want to close that gap."

Founders James Ekenstedt and Evan Katz, both sophomores, structured The Bridge to provide the homeless an expressive outlet and income source, The Daily News noted. Contributors earn $10 to $25 per story, and certified vendors -- the homeless and formerly homeless -- keep all sales proceeds. Each vendor receives 20 free papers to be sold for $1 apiece and may buy more, at $0.25 each, garnering them a $0.75 profit.

To give these figures some context, Inside Higher Ed pointed out that it costs $6 to $14 for someone to spend the night in a Memphis homeless shelter. No free shelters exist. Unemployment in the city is high, and panhandling is illegal.

Memphis resident Cynthia "Cee Cee" Crawford, a vendor who's been homeless three times, told The Daily News that selling The Bridge is a way to show the public homeless individuals have value.

"These people that are out here aren't just homeless or drunks or lazy people who don't want to do things or pay their bills. These are viable people who are worth a second chance," she stated. "This paper to so many people will be that second chance to become a productive member of society and to feel like you are a part of something."

Rhodes College's Kinney Program and private donors financed the paper's startup. The goal is for The Bridge to become a tax-exempt nonprofit organization; staff are currently in the process of making that a reality. Ekenstedt and Katz are working, too, to ensure the newspaper can run into the future.

The homeless community has embraced The Bridge, said Paul Garner, organizing coordinator for the nonprofit organization Homeless Organizing for Power and Equality, as it's something those individuals can take pride in and use to share issues they find important.

For Crawford, writing for The Bridge is "healing," she told The Daily News.

"It can help a lot with self esteem. ... It helps us realize I can win this battle against homelessness," she added.