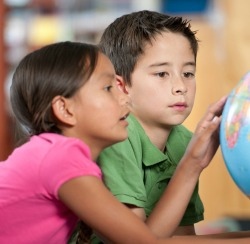 On Wednesday, May 23, Mitt Romney spoke at the Latino Coalition's Annual Economic Summit in Washington about his plan for education reform. As The New York Times reports, Romney proposed a K-12 education policy that would allocate federal education funds for individual children rather than for local schools. The new measure would expand school options by allowing parents of low-income and special needs children to use federally allocated funds to finance their child's education for any public school (and possibly some private schools) in the state. Yahoo! News notes that Romney's initiative aims to improve the national high school graduation rate and comparatively low performance in math.

According to The New York Times, Romney plans to take $4 billion in federal funds currently allocated for teacher quality and send that money to states as block grants. Romney's proposal also calls for increasing the number of charter schools and instituting a "public report card" that depicts schools' shortcomings, a measure similar to one in President Bush's No Child Left Behind Act.

As Yahoo! News mentions, critics of Romney's plan oppose it because it does not provide any measure to improve low-quality schools. Moreover, the number of children who want to attend certain schools under the plan will likely outweigh the number of students those schools can accept. The New York Times notes that Romney's education reform plan might not have the intended effect of students being able to choose better schools, as the federal government only funds 10 percent of education costs for students.

According to The Chronicle of Higher Education Romney explained in a speech before the Latino Coalition summit, "We must stop fueling skyrocketing tuition prices that put higher education out of reach for some and leave others with crushing debt." While Romney did not mention any specific regulations that he would repeal if elected, he did discuss plans to reinstate bank-based lending for federal student loans, an initiative that he believes will help reduce the cost of tuition and make college more affordable.

Chester Finn, Jr., president of the Thomas B. Fordham Foundation education policy group, comments on Romney's education proposal in The New York Times: "It's a fundamental structural change of focus away from districts and schools to focus on kids and families. It changes the allocation of power as well as money, from people running school systems to parents choosing schools."