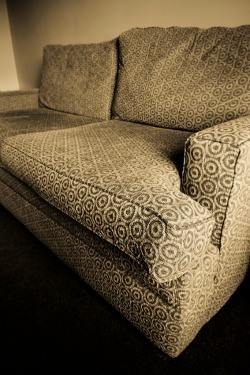 The roommates immediately began digging through the couch to see what else they could find. One by one, they discovered numerous envelopes filled with cold, hard cash.

"Just when we thought we pulled out the last envelope we'd find another $1,000 a few minutes later," Guasti told The Little Rebellion.

Once all of the money had been excavated from the furniture, the three realized that it totaled over $40,000. Of course, they immediately began fantasizing about what they could do with the money. However, things quickly changed when Russo discovered a woman's name on one of the envelopes.

"We had a lot of moral discussions about the money," Russo said. "We all agreed that we had to bring the money back to whoever it belonged to…it's their money - we didn't earn it. However, there were a lot of gray areas we had to consider."

After calling their parents for advice, Werkhoven, Guasti, and Russo decided that they should try to find the woman who donated the couch to see if the money was hers. According to WABC-TV New York, Werkhoven's mother took the initiative to find the couch's original owner in the phonebook.

Werkhoven then made the call.

According to the woman, who asked to remain anonymous, the money they recovered from the couch was her life savings, and the furniture donation was a mistake. The Little Rebellion reported that the woman's daughter and son-in-law, who were unaware of the money, donated the couch when her doctor suggested she stop sleeping on it and upgrade to a full-size bed.

Despite worries over whether or not the story was true, the three drove to the woman's home to return the money. Fortunately, they instantly knew they had done the right thing.

"I think the part of this whole experience that cleared away my prior thoughts and worries was when I saw the woman's daughter and granddaughter greet us at the door." Werkhoven recalled. "I could just tell right away that these were nice people."

As a reward for returning the money, the anonymous woman gave Werkhoven, Guasti, and Russo $1,000 each.