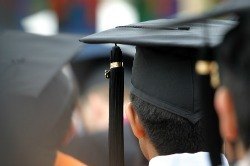 College commencement speeches can be the stuff of inspiration -- and, according to The Los Angeles Times, controversy. It is the latter that put Rutgers University in the spotlight this week, but it is not the only school whose commencement choices have turned into public relations headaches, and it is unlikely to be the last.

Rutgers University made headlines this week when it invited Eric LeGrand, a Rutgers football player who suffered a paralyzing injury, to speak at commencement this month -- and then promptly rescinded it. According to NJ.com, the school later re-extended its invitation to LeGrand, but not before the ordeal garnered a good deal of press coverage. As USA Today explained, it all started when LeGrand received a call asking him to fill in for former Secretary of State Condoleezza Rice, who withdrew earlier this week following student protests. An excited LeGrand began planning what he would say to his fellow students.

"I was just going to tell them my story, about the whole process," LeGrand said. "Starting in 2005, being recruited by Rutgers and what it meant to me to play here and go to school here. And then the way everybody supported me through my injury, I was just going to give inspirational words about how they should attack life. All the (graduates), they're my age so I was going to try to (say) words they could remember, words that would inspire them to do great things in life."

That all changed on Monday, when LeGrande received a call from Rutgers athletics director Julie Hermann, who told him the school had decided to go in a different direction. Hours later, Rutgers announced that former New Jersey Gov. Thomas H. Kean, not LeGrande, would serve as the keynote commencement speaker. LeGrand expressed disappointment.

"I just want an explanation," he told NJ.com. "I wish somebody would have given me a call tonight and explained to me why. Then I can understand, but don't just leave me hanging."

LeGrand's story quickly gained traction, prompting a response from Rutgers. According to NJ.com, the school released a statement Tuesday announcing that it was all a misunderstanding. LeGrand would speak at commencement, and Rutgers president Robert Barchi would personally give LeGrand his degree.

"Eric holds a special place in the hearts of the Class of 2014 and the entire university community," read the statement, as reported by NJ.com. "We are thrilled that he will be joining us on stage to make this special occasion ever more memorable."

The Los Angeles Times reported that controversy surrounding commencement speeches is not new for Rutgers or for many other schools, for that matter. Even LeGrand was slated to be a replacement for Rice, who announced she would not speak following protests from students criticizing her "high-level role during the controversial Iraq War," as the Los Angeles Times put it. Other graduation speakers who have stirred debate include the likes of U.S. Attorney General Eric H. Holder, Jr., actor James Franco, Hewlett-Packard CEO Meg Whitman and television personality Ben Stein.

"Condoleezza Rice latest graduation speaker to back out amid protests," latimes.com, May 3, 2014, Paresh Dave, http://www.latimes.com/nation/nationnow/la-na-nn-condoleezza-rice-commencement-controversy-20140503-story.html