Salary, Flexibility, and Impact Top the List of Factors in Employee Satisfaction 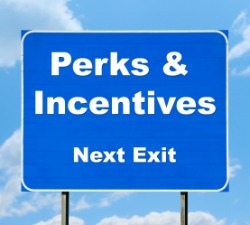 Workplace perks, which range from free coffee to on-site massages, could be seen as either a frivolous use of money, or a valuable investment in worker satisfaction. A new survey suggests the latter conclusion may be more fitting, at least for certain perks. According to the results, the right workplace perks may not only improve workplace satisfaction, but also help with retention of high-performing employees.

A recent survey sponsored by the jobs site CareerBuilder found that 32 percent of employers lost top talent in 2012, and 39 percent fear they will lose high-value workers in 2013. The results, published in a press release, suggest this fear may be justified. Though 66 percent of employees say they are happy with their jobs, a full 25 percent plan to find a new job within the next two years. The results suggest that employers may be able to minimize the risk of losing these workers by investing in the right workplace perks. The key is to know which benefits employees want most.

The survey suggests that when it comes to improving employee satisfaction, all office perks are not created equal. According to the results, half-day Fridays ranked first with 40 percent of employees saying it is the one perk most likely to make their workplaces more satisfying. On-site fitness facilities (20 percent) came in second, followed by the ability to wear jeans (18 percent), and daily catered lunches (17 percent). On-site daycare scored last at just 6 percent, though the Albany Times Union reports that surveyors did not identify how many participants were parents of young children, which may have been a factor.

The survey also explored factors outside of special perks that might drive employee satisfaction and retention. Salary topped the list with 88 percent of respondents saying it is a major contributor to workplace happiness. Other factors that fared well in the results include flexible scheduling (59 percent), being able to make a difference in their jobs (48 percent) and having challenging work (35 percent). Employees ranked private offices (17 percent) and access to a company car (14 percent) last. The Kansas City Star notes that while it is no surprise that salary fared so well in the survey, it marks a clear shift from the late 1990s when pay often ranked behind other workplace perks.

"What determines job satisfaction is not a one-size-fits-all, but flexibility, recognition, the ability to make a difference and yes, even special perks, can go a long way," Rosemary Haefner, Vice President of Human Resources at CareerBuilder, said in the press release. "Being compensated well will always be a top consideration, but we're seeing work-life balance, telecommuting options and learning opportunities outweigh other job factors when an employee decides whether to stay with an organization."

The survey was conducted online in November by Harris Interactive; 2,611 hiring managers and 3,991 employees participated.