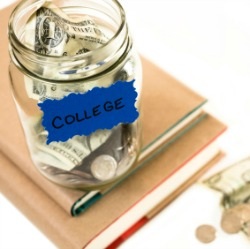 Not too long ago, parents were dipping into their retirement funds to help pay for their kids’ college tuition. Times are changing, though, and parents seem to be more cost-conscious than before. According to a recently released report, parents are using less of their own income and savings to pay for college, forcing students to rely more on grants and scholarships or student loans.

Sallie Mae’s “How America Pays for College” annual report, which phone-interviewed 800 undergraduate college students and 802 parents of undergraduates in spring 2013, showed that grants and scholarships are now the number one source of paying for college. Grants and scholarships covered 30 percent of college costs in 2013, an increase of five percentage points from 2009. At the same time, financial contributions from parental income and savings now covers 27 percent of college costs, down from its peak of 37 percent in 2010. Borrowing is the third source of paying for college, with four in 10 families relying on loans.

Though the trend seems encouraging, Salle Mae vice president for public policy Sarah Ducich noted that it is mostly a result of economic factors.

“Parents are still willing to stretch themselves financially, but their incomes just haven’t kept up,” said Ducich in The Wall Street Journal.

According to the report, more parents than ever (85 percent) recognized college as being an important investment so families have come up with a number of ways to save money since the recession. For example, more families eliminated colleges based on cost at some point during the application process (67 percent versus 58 percent in 2008). Other means of cutting costs included student (47 percent) or parent (20 percent) working more, students taking accelerated coursework (27 percent) and students living at home rather than in dormitories (57 percent). According to The Wall Street Journal, even the number of students living at home from families who earn more than $100,000 doubled since three years ago to 48 percent.

“I think we’ve entered into a different era with regard to how families approach paying for college,” said Ducich in The Wall Street Journal. “They are now approaching it with a cost consciousness they didn’t have prior to the recession.”

USA Today, however, pointed out that while students and families may be doing more to cut costs while kids are in college, they still are not doing enough planning before college. According to the report, six out of 10 families lack a financial plan to pay for all four years of college. Furthermore, families do not have a financial contingency plan to address potential problems. In fact, 40 percent of surveyed families reported experiencing significant expenses that they had not anticipated.

“Who pays for college education? Not Mom and Dad,” nbcnews.com, July 23, 2013, Sharon Epperson