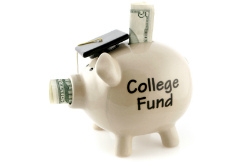 Despite the rising cost of higher education, American families are spending less to send their children to college.

According for a news release, Sallie Mae's fourth annual study of college students and parents, called "How America Pays for College", surveyed 1,600 undergraduates, ages 18 to 24, and parents of college students to find out how they covered the cost of higher education. On average, families spent nine percent less on college during the 2010-2011 academic year. SmartMoney reported that this is the first time that number has declined since Sallie Mae started the survey in 2007.

As The Washington Post pointed out, just a few years ago the opposite was true--families were spending progressively more on college from 2008 to 2010. But that changed in the most recent academic year as more families opted for lower-cost schools. The survey revealed that more students from high-income families chose to go to a community college. According to SmartMoney, during the 2010-2011 school year, 22 percent of students from families earning $100,000 or more attended a community college, up from just 12 percent the year before.

"It is not at all surprising that American families are increasingly cost-conscious, especially considering the severe economic crisis together with tuition costs," said Clifford Young, lead author of the study, in the news release.

Indeed, SmartMoney pointed out that the survey showed that fewer parents were willing to compromise when it came to their college budgets and instead, did whatever they could to lower costs, including having their children live at home while in school.

According to the news release, more families received grants and scholarships in 2010-2011--67 percent of families, compared to 55 percent the previous year--and as a result, these funds had a larger role in paying for college. Thirty-three percent of college costs were covered by grants and scholarship in 2010-11, compared to 23 percent the year before. Parents covered 37 percent of college expenses with savings, income and loans, while students pitched in 11 percent from income and 15 percent through borrowing.

The survey also found that students were less aspirational and more practical--many reported that they wanted to go to college primarily to earn more money and land better jobs.