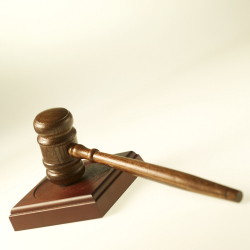 An ordinance that was passed in 2003 gave minorities and female contractors an advantage of five to ten percent in competitive bidding and also required general contractors to focus on recruitment of female and minority subcontractors in San Francisco.

After being sued by two companies who said they lost contractors because of the ordinance, San Francisco challenged the state's ban on affirmative action. The city argued that Prop 209 violated the U.S. Constitution's Equal Protection Clause by creating barriers for minorities and female contractors, while allowing preferential treatment for other groups such as veterans. The Los Angeles Times added that the law violated the so-called political structure doctrine, which "prohibits government from creating structures that make it difficult for minority groups to obtain beneficial laws".

According to Mercury News, the Supreme Court upheld Prop 209 in a 6-1 ruling, which also overthrew the 2003 ordinance. City lawyers, however, do not feel the ruling was a total loss as Justice Kathryn Mickle Werdegar agreed to give San Francisco a chance to salvage the law if they could "prove it is the only possible way to fix entrenched discrimination in the city's contracting programs". Sherri Kaiser, San Francisco's lead attorney on the case, said, "This is the first case that blows a hole in 209." She is confident that the city will be able to prove that affirmation action is needed.

Justice Carlos Moreno was the only one who dissented and argued that the law was indeed necessary in order to correct discrimination. According to SF Gate, Moreno said Prop 209 imposed a burden on women and minorities and was a huge blow to programs that aid those groups. Additionally, Prop 209 cannot be modified without voter approval, which Moreno pointed out would be difficult to earn at the ballot box.

The Los Angeles Times reported that Sharon L. Browne, principal attorney for the Pacific Legal Foundation, the public interest law firm that sued the city on behalf of the two companies, speculated that San Francisco would not be able to justify a need for the ordinance. "We are poised for ultimate victory in this case, because it is already clear that San Francisco has no evidence to support its claim of past intentional discrimination by the city or its contractors against minorities and women," she said.