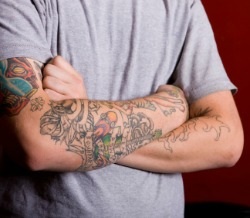 The city of San Pablo, CA hopes to lower its high unemployment rate by giving jobseekers a chance to erase their past.

According to The Huffington Post, the city, in partnership with the San Pablo Economic Development Corporation and New Skin Adult Tattoo Removal recently launched Removing Barriers, a program offering monthly tattoo-removal. Though tattoos are becoming less of a taboo in the workplace, body ink can still be a barrier for some jobseekers, particularly in certain industries. For $50 a session, far less than the typical cost, San Pablo residents can get visible tattoos removed. Non-residents can also take advantage of the low-cost service for $75 per session.

"People with visible tattoos can face significant boundaries," said Leslay Choy, general manager of the Economic Development Corporation, in SFGate. "I've had bank vice presidents tell me they have back-office employees who are great, but they cannot promote them to being tellers because bank customers have certain expectations."

SFGate also added that while certain parts of the San Francisco Bay Area may be more accepting of body art, others are not. In more conservative areas, tattoos could cost someone a job offer.

Gabriela Diaz of San Pablo told SFGate that she thinks her neck tattoo has made her job search more difficult.

"Especially in Orinda or Walnut Creek, I've gotten turned down when I know I was qualified. I'm pretty sure it's because of my tattoo," said Diaz.

Furthermore, according to the Contra Costa Times, most clients got their tattoos when they were younger and now regret them.

"I was in a different state of mind," said Fiona Lam to the Contra Costa Times. Lam got several tattoos on her neck and forearms in her late teens.

However, what makes this program unique is that, in addition to tattoo-removals, it also offers clients eight weeks of job readiness training and four weeks of financial responsibility workshops. SFGate reported that the workshops offer training on various important job skills, such as how to write a cover letter, negotiating conflict, career advancement and financial planning. According to the Economic Development Corporation's website, the workshops are optional and free, but participants must continue with their tattoo removal if they want to do the full program. Those who complete all of the training get reimbursed more than half the cost of their tattoo removal, reported The Huffington Post. In San Pablo, where the unemployment rate stands at 15.6 percent, city leaders hope that the program will make a difference. Furthermore, Choy told SF Gate that San Pablo is one of the poorer cities in Contra Costa County so the program is a much-needed resource for residents who are unemployed or underemployed.

"Our goal is education and training to enhance the work force… We want to shift the needle in terms of unemployment and underemployment," said Choy in the Contra Costa Times.

Removing Barriers started in April, but according to SFGate the job-readiness component was launched just this month. The Contra Costa Times reported that the program costs approximately $66,000 and is funded in part by proceeds from measure Q, which raised the city's sales tax by half a cent for five years and then a quarter-cent five years after that.