Santa Monica Community College To Charge More For Some Classes 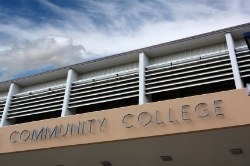 Due to a reduction in the number of available classes, a California community college has chosen to expand its offerings by charging students more to take certain classes.

As reported by the Los Angeles Times, starting this summer, Santa Monica Community College will create a nonprofit foundation which will offer high demand classes at a higher cost--$200 per unit. Currently, classes are offered at $36 per unit.

"We either have to do nothing, which is not an option, or try something to help students who are literally being turned away by the hundreds of thousands around the state, at just the time when the demand is highest," College Spokesman Bruce Smith said in EdSource Extra.

The plan is described as the first of its kind in the U.S., according to the Los Angeles Times. Classes, which will be taught by faculty, will be in high demand subjects, such as English, math, science and writing.

"Our classes are inundated with students begging to be enrolled after they're full," said Santa Monica College President Chui L. Tsang to the Los Angeles Times. "We've had people from the community asking us if we can open up more courses."

The school is home to some 34,000 students and is considered a wild success as far as two-year colleges go. Santa Moncia Community College is said to be attractive to many students in the Los Angeles area who attend their first two years there to save money before finishing up their four-year degree elsewhere.

However, decreases in state funding that have occurred over the past several years are at the heart of the problem. More than 1,000 class sections have been cut at the school since 2008, and, just this year alone, state funding decreased by $11 million at Santa Monica Community College, reported the Los Angeles Times. Furthermore, the school could lose another $5 million in the 2012-13 year if an upcoming tax initiative does not pass.

The community college is not alone in its problems. Since 2008, California's entire community college system has seen a loss of some $809 million in state funding, according to The New York Times. Additionally, David Baime, American Association of Community Colleges senior vice president for government relations and research, pointed out that this has all occurred during an uptake in enrollment at many schools.

"In many cases, and California most prominently, amid the recession there was a huge spike in enrollment concurrent with budget cuts," he told The New York Times. "The colleges have just maxed out in terms of how many students they can serve."

Not unexpectedly, the increase in cost for some classes has caused an uproar among some students.

"It's creating a two-tiered system of wealthier students who can afford classes and struggling working-class and low-income students competing for the scraps of what's left," Student Government President Harrison Wills said in EdSource Extra. "It's definitely a move in the wrong direction."

Yet, some help is forthcoming. According to EdSource Extra, one donor and his wife have come forward and offered $250,000 in scholarship money to be used to assist students unable to afford the more expensive classes. Additionally, the Los Angeles Times reported that state financial aid can be used to pay for the more expensive classes. Ultimately, the plan does show innovation, according to Dan Hurley, director of state relations and policy analysis at the American Association of State Colleges and Universities.

"At a four-year school, it might turn some heads, but it makes sense at a community college level where the tuition is low and the capacity issue is especially acute," he said in the Los Angeles Times.