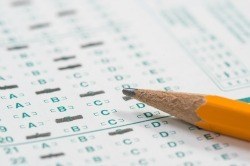 A new study may cause more colleges and universities to question the value of standardized test scores in their admissions process.

Critics of the ACT and SAT have long argued that these tests do not predict a student's aptitude or intelligence and, therefore, are not strong predictors of college success. A new study released by the National Association for College Admission Counseling (NACAC) shows that could indeed be true. According to Diverse, the study found that there were no significant differences in college performance or graduation rates between students who submitted test scores to colleges and those who did not. Just 0.05 GPA points separated "submitters" and "non-submitters", and graduation rates for "non-submitters" were just 0.6 percent lower than those of "submitters".

"By any standard, these are trivial differences," wrote the study, as quoted by Diverse.

Additionally, the study found that high school GPA was a stronger indicator of college success. Students with high GPAs, even without testing, are likely to succeed in college, while students with low GPAs, even with a broad range of testing, typically have lower college GPAs and graduation rates.

Dr. Williams C. Hiss, co-author of the study, told Diverse, "From my point of view, the key message here is that human intelligence is far more fluid, complex, and multi-layered than we perhaps think it is."

For decades, standardized test scores have played a significant role in college admissions.

"A lot of my teachers have said that if you don't have these scores, [colleges] won't even look at your applications," said Mara Meijer, a high school junior in Belmont, CA, to NPR.

The report, however, can be a strong case against the weight of standardized test scores in college admissions.

"My hope is that this study will be the first step in examining what happens when you admit tens of thousands of students without looking at their SAT scores," said Hiss in NPR. "And the answer is, if they have good high school grades, they're almost certainly going to be fine."

Diverse revealed hopes that the study will encourage colleges to re-evaluate their admissions process and consider test-optional policies, as it could be a viable route to greater access.

NPR noted that the report could further the current public policy debate in Washington D.C., as President Obama continues to push for more low-income students, minority students and first-generation-to-college students in higher education. The study showed that non-submitters were more likely to fall within those demographics.

While students may be thrilled about the study's results, test prep companies are not. The test preparation industry -- a $2 billion-a-year industry -- acknowledged the value of the study's findings but argued that neither GPA nor test scores should be used alone when making admissions decisions.

"[M]ore information is always better in admissions decisions… Another reason why tests are also important is to ensure that grade inflation is held at bay," said Wayne Camara, ACT's senior vice president of research, in NPR.