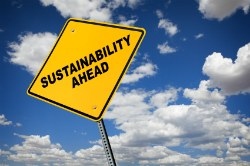 Washington D.C. may be known as the political powerhouse of the nation, but it might also be referred to the 'Greenest College Town' in the U.S. one day.

Earlier this week, the heads of nine Washington D.C. universities signed the College and University Sustainability Pledge, or CUSP, that commits them to using sustainable polices in areas like buildings, grounds maintenance, energy use, and transportation, according to The Washington Examiner.

Specifically, some of the steps these schools might take include purchasing renewable energy, reducing storm water runoff, using tap water instead of bottled water, and working toward LEED certification on new construction.

The progress comes as a result of Washington D.C. Mayor Vincent Gray's attempt to create a more sustainable community. In fact, early last year Mayor Gray instituted an action plan to make the city the most sustainable in the country. The primary focus then was on governmental institutions; now higher-education has become involved.

"While the climate action plan had concrete measures to address government-sector emissions, the community center emissions was a little abstract - they weren't sure how they were going to mobilize sections of the community on climate change," Josh Lasky, sustainability manager for the University of the District of Columbia told The Chronicle of Higher Education. "The higher-ed sector is here to contribute... We're trying to establish higher ed as a leadership sector."

"Through our work together on the College and University Sustainability Pledge, the higher education community will be able to strengthen our collective commitment to creating and implementing environmentally sustainable practices across our campuses and throughout the District of Columbia, in support of Mayor Gray's vision of making our city the greenest in America," said John DeGioia, president of Georgetown University, in the press release.

The schools are planning a number of changes, all of which are to be implemented or to be in process by the end of 2012. American University, for instance, wants to become a carbon neutral campus by 2020 and neutralize its greenhouse emissions. Already, in the summer of 2011, the university installed one of the largest solar-electric systems in the city.

Officials at George Washington University want to reduce greenhouse emissions by 40 percent by 2025; one of its residence halls became Washington D.C.'s first college campus building to become LEED Gold certified, noted the press release. Plans at the other schools vary and many have already taken steps toward increased sustainability.

"By putting this pledge in place--and essentially because no one else has said it yet--we are saying that we are the greenest college town in America," Lasky said in The Chronicle of Higher Education.