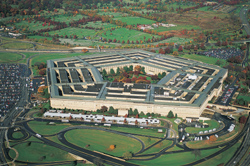 Defense Secretary Robert M. Gates announced on Monday numerous initiatives "to reform the way the Pentagon does business and to eliminate duplicate, unnecessary overheard costs". The initiatives are part of the secretary's overall effort to save $100 billion over the next five years and could mean the loss of thousands of jobs.

According to CNN, the department's current budget totals more than $530 billion a year. Although defense officials argued they need increases of two to three percent a year to maintain its current war fighting capabilities and meet modernization needs, the recession has forced the department to propose a one percent budget increase for next year; therefore, Gates said the department needs to rethink "the culture of endless money that has taken hold" and replace it with "a culture of savings and restraint" in order to make up for the difference.

Although Secretary Gates proposed numerous cuts and freezes, The New York Times reported that the most significant initiatives were terminating the Business Transformation Agency, with 350 people and the office of the assistant secretary of defense for networks and information integration, with 200 employees; imposing a ten percent annual cut in funding for support contractor personnel over the next three years; a cap on the number of generals, admirals and senior civilian positions and the eventual elimination of at least 50 general and admiral posts and 150 senior civilian positions over the next two years; and eliminating the U.S. Joint Forces Command in Norfolk, Virginia, which may be the first time a major command was shut down and removed from the books.

According to The Washington Post, the Joint Forces Command, which employs approximately 2,800 military and civilian personnel and 3,300 contractors, was "established in 1999 to coordinate training and military doctrine among the branches of the armed services". It is also one of the commands involved in deployment of armed forces around the world. If closed, its responsibilities would be reassigned to other personnel and Secretary Gates said the department would provide assistance to employees affected by the closing.

Previously, the Obama administration has exempted national security from budget reductions, but in light of the difficult economic situation, Secretary Gates argued that Defense Department budgets should not increase unless the department has made good use of every single dollar it has.

Because the amount of savings has not been specified, defense officials believe the proposed cuts are a tactic to reduce opposition caused by the federal government's soaring deficits, reported The Washington Post.

Some lawmakers, on the other hand, argued that the proposed reductions were a good start and encouraged the implementation of additional cuts. The Defense Business Board, an advisory group at the Pentagon, recommended that in addition to closing the Joint Forces Command, the Defense Department also reduce its workforce to about 650,000, or the size it was in 2003.

The proposals have also encountered staunch opposition. According to CNN, Virginia's Democratic senators strongly disapproved of the proposal to close the Joint Forces Command. Senator Jim Webb said getting rid of it "would be a step backward and could be harmful" to the military. Senator Mark Warner added, "I can see no rational basis for dismantling" the Joint Forces Command.

According to the press release, Secretary Gates called on military personnel and civilians to come up with more ways to utilize current resources and reduce overhead. "Within the department, we are launching an online contest for the purpose of soliciting and rewarding creative ideas to save money and use resources more effectively," he said.