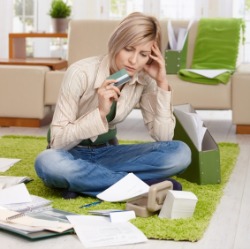 Imagine you are laid off from your job. During months of unemployment, you rely more heavily on credit cards and, perhaps, even lose your home. Finally, you coast through the interview process for a job that suits you perfectly only to learn, weeks later, that your credit history cost you the position. Employer credit checks have cost many Americans jobs in this post-recession economy, reports CBS News. Now Senate Democrats want to pass legislation that could make the practice illegal.

On Tuesday, seven Senate democrats co-sponsored the Equal Employment for All Act, which would bar companies from using credit checks to weed out job applicants, reports The Washington Post. The practice has become increasingly common in this era of stubbornly high unemployment, and some argue it punishes candidates who have suffered difficult times.

"No one should be denied the chance to compete for a job because of a credit report that bears no relationship to job performance," Sen. Elizabeth Warren (D-Mass.), one of the bill's co-sponsors, told The Washington Post. "For millions of working families, a hard personal blow translates into a hard financial blow that will show up for years in a credit report."

Some business and trade groups, like the Society for Human Resources Management Consumer Data Industry Association, or CDIA, warn that employer credit checks are necessary to protect themselves from potential fraud or embezzlement. The CDIA estimates that employee theft amounts to about $1 trillion nationally each year, or about $175,000 per business.

"The top two red-flag warnings present in these crimes were instances where the fraudster was living beyond his or her financial means or experiencing financial difficulties," CDIA vice president of public affairs Norm Magnuson said in an email to CBS News. "That's important because employee fraud and theft can very well determine whether a small business survives or not."

An editorial published by The New York Times challenges this idea, however, noting that research has shown that people with poor credit are not necessarily poor job candidates. Federal Trade Commission data suggests that as many as ten million Americans have errors on their credit reports, and research published earlier this year by the research and policy group Demos showed that most low- and middle-income families that acquired damaged credit ratings during the Great Recession did not do so because of irresponsible behavior, but because they lost their jobs. Others lost their health insurance, were sick or injured, and racked up medical debt. "Poor credit tells a story of medical misfortune far more convincingly that one of poor work habits," Demos researchers said.

Another reason Warren and her colleagues want to bar employer credit checking, notes CBS News, is because the practice may unfairly hurt minorities who were statistically more likely to be targeted by predatory lenders during the subprime mortgage boom. Nancy Zirkin of the Leadership Conference on Civil and Human Rights told CBS that these consumers were "frequently steered in to high interest loans even though they could have qualified for loans with better terms."

Rep. Steve Cohen (D-Tenn.) introduced a similar piece of legislation in 2011, reports The Washington Post, but it was stalled in committee. It is unclear whether Warren's bill, which lacks Republican support, has a better chance of making it to the Senate floor.