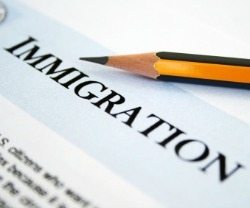 With bipartisan support, the Senate passed what is being called a landmark immigration bill on Thursday that would drastically reform the nation's current immigration laws.

As reported by The Detroit News, the bill known as Senate Bill 744 passed 68-32 and is the first revision of the nation's immigration laws since 1986, when President Ronald Reagan signed a bill that granted legal status to 3 million undocumented workers. Under the Senate's bill, some 11 million undocumented immigrants who are currently in the U.S. would have a path to citizenship. It would also revamp the country's visa programs and dramatically increase border security between the U.S. and Mexico.

"This legislation will be good for America's national security as well as its economic security," said Senate Majority Leader Harry Reid in The Detroit News. "It makes unprecedented investments in border security, it cracks down on crooked employers who exploit and abuse immigrant workers, and it reforms our legal immigration system."

The bill has gone through months of revisions and negotiations before reaching Thursday's Senate passage. According to Business Insider, the bill would offer undocumented immigrants a 13-year path to citizenship by allowing them to apply for Registered Provisional Immigrant status. This would then allow them to stay in the U.S. after paying a fine, fees and back taxes as well as passing a background check. After 10 years, they could then apply for Permanent Resident status. The bill would also revise the current guest-worker program, granting minimum wage to guest workers who often work on construction projects or in hotels and restaurants or are brought in to the country when there is a labor shortage. Highly skilled immigrant workers would also benefit from the bill, as it would make it easier for companies to hire foreign workers in the fields of science, engineering and technology. According to SFGate, a provision would increase the number of H1-B visas that the U.S. could offer from 65,000 to 110,000 a year.

Critics, however, worry that this provision might discourage American students from pursuing those fields.

Another key piece of the immigration bill would put $46.3 billion towards border security. An additional 20,000 Border Patrol agents would be added, more aerial drones for surveillance and 700 miles of fencing along the Mexico border, reported The Detroit News. It is the most expensive border security plan ever, but gained Republican support.

The bill now moves to the House, but it is unlikely that it will pass in its current version.

"The House is not going to take up and vote on whatever the Senate passes," said House Speaker John Boehner, as quoted by The Detroit News. "Immigration reform has to be grounded in real border security."