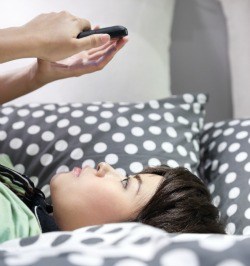 It's 10:30 pm, you've had a long day at the office and you're finally about to call it a day. You just remembered, though, that you still haven't sent that email to your team about Friday's presentation so you grab your smartphone to send off one last message. Thanks to smartphones, we're all guilty of reading and sending work emails late into the evening, just before going to sleep. However, according to new research, while we think we're being more productive by doing so, we're actually making ourselves unproductive for the next workday.

According to a press release, researchers from Michigan State University, the University of Florida and the University of Washington found that using a smartphone at night to do work caused employees to be more tired in the morning and left them disengaged by the next afternoon, leading to a less productive workday. The researchers came to this conclusion after conducting two studies, reported The Wall Street Journal. In the first study, 82 mid- to high-level managers were asked to complete daily surveys about their smartphone use after 9:00 pm, their sleep patterns the night before and their level of alertness and engagement at work. The participants who said they used their smartphones the night before said they felt more exhausted in the morning and also reported being less engaged at work during the day.

The second study analyzed the usage of other electronic devices, including smartphones, among 161 workers from various occupations. According to the press release, smartphone use at night had the worst effect on sleep than any other device.

"…[M]any would consider smartphones to be among the most important tools ever invented when it comes to increasing the productivity of knowledge (and) work," wrote the researchers in the study, as quoted by the Toronto Sun. "However, our new research indicates the greater connectivity comes at a cost: using a smartphone to cram more work into a given evening results in less work done the next day."

As The Wall Street Journal noted, maintaining focus requires a lot of energy, so when you're focused on sending an email on your smartphone, you're less likely to relax and the longer it will take to fall asleep. Additionally, the press release reported that smartphones also emit blue light, which actually hinders melatonin, the chemical in the body that promotes sleep.

"The nighttime use of smartphones appears to have both psychological and physiological effects on people's ability to sleep and on sleep's essential recovery functions," explained Russell Johnson, a researcher from Michigan State University, in the press release.

According to The Wall Street Journal, previous research from Harvard Business School professor Leslie Perlow found that executives were more excited, more collaborative and more efficient at work when given a chance to disconnect on a regular basis. However, while that all seems obvious, going off the work grid -- even just overnight -- is easier said than done.

The Toronto Sun noted that researchers said the onus is on leaders to change the culture by setting an example and not sending emails in the evening. After a full day at the office, everyone needs to disconnect and get a good night's rest.