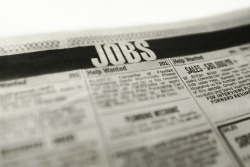 Today the Labor Department delivered what appeared to be encouraging economic news: The United States added 103,000 new jobs in September--far more than analysts had expected.

But today's report from the Bureau of Labor Statistics was tempered with the news that the unemployment rate for September remained at 9.1 percent, the same as in August. Since April, the rate has remained fairly steady, ranging from 9.0 to 9.2 percent. In all, the report indicated that 14 million people are out of work, including 6.2 million who have been unemployed for at least 27 weeks.

"This kind of job creation is enough to keep up with population growth," noted National Public Radio, "but not enough to drive down the unemployment rate. . . . The job market seems frozen in place."

The 9.1 percent unemployment rate also did not include people who now work part-time because they are unable to find full-time jobs, or people who have given up searching for work. Including these so-called "underemployed" and discouraged workers boosted the rate to 16.5 percent in September.

The increase in jobs partially reflected the return to work in September of about 45,000 Verizon workers who had been on strike in August. Professional and business services, healthcare, and construction all saw job gains, while government employment decreased.

Nevertheless, many economists were not optimistic about the BLS report. "This is not the kind of job growth that brings unemployment down," noted James Glassman, senior economist at JP Morgan Chase & Co. in New York, who was interviewed by Bloomberg. "The sobering thing about all this is because the job market has been so slow we have not had a normal flow coming into the job market, so that's why unemployment isn't going up."

Some economists noted that many employers are still reluctant to add jobs. "Given the complete lack of clarity as to what the economic outlook will be and the uncertainty about what's going on in Europe and the political paralysis in Washington," said Bernard Baumohl, chief economist at the Economic Outlook Group, who was interviewed by the Times, "there is not much of an economic justification for employers to suddenly ramp up hiring."

"The Job Market is Frozen for Everyone," npr.org, October 7, 2011, Jacob Goldstein