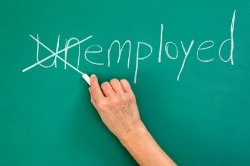 Today's jobs report released by the Department of Labor revealed the national unemployment rate dropped to a three-year low and the third quarter fared stronger than expected, according to The Wall Street Journal.

In September, the economy welcomed 114,000 new jobs in the public and private sectors. According to CNN Money, the health care sector added 43,500 jobs. Transportation and warehousing added 17,100 new jobs, while restaurants and bars added 15,700 jobs. Analysts also revised jobs gains upward to 181,000 for July and 142,000 for August, reported The Wall Street Journal.

The biggest gains in hiring were seen in part-time positions, which contributed significantly to the overall employment figures. September saw the creation of 582,000 new part-time jobs. Overall, 873,000 more individuals were employed in September than August.

Since the start of the financial crisis, the monthly jobs report has been closely watched as an economic indicator. Both Obama and Presidential Candidate Mitt Romney have used fluctuations in the numbers to their favor, reported The New York Times.

Yet, due to the way unemployment rates are calculated, economists said this month's decline in unemployment may have occurred over a lengthier time period than indicated. These calculations can lead to inflated jumps that later need revision, according to The Wall Street Journal.