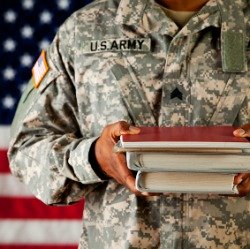 As experts debate the long-term effects of the massive government spending cuts that went into effect this month, many military service members are already feeling the pinch. At least two branches have cut a popular higher education benefit, leaving soldiers scrambling for other options.

According to The Washington Times, the Army announced Friday that it is suspending its Tuition Assistance program for active duty and reserve soldiers in response to ongoing funding woes: The Army is facing a more than $18 billion shortfall due largely to the automatic defense cuts -- also known as the sequestration -- that went into effect March 1. The change will not affect the hundreds of thousands of service members currently receiving Tuition Assistance benefits, though no new requests will be approved unless funding becomes available again.

"This suspension is necessary given the significant budget execution challenges caused by the combined effects of a possible year-long continuing resolution and sequestration," said an official Army statement Friday, as reported by The Washington Times.

Michael Dakduk, executive director of Student Veterans of America, told Inside Higher Ed that the move could have a devastating impact on the 1 million service members expected to transition into the civilian workforce over the next five years. "Higher education is increasingly important in today's labor market," he said."If [military service members are] going to be successful, they're going to have to pursue some postsecondary credential. All the signs are there: We have to value higher education. There's no way around it."

Jim Sweizer, vice president of military programs at the American Public University System, told Inside Higher Ed that the move is unprecedented and that groups like his will have to work overtime educating prospective students about other options still on the table, such as the G.I. Bill and federal financial aid.

"We've got to do what we can to make our students educated consumers to let them know what's out there," said Sweizer. "On the optimistic side, those sources of funding do exist, so it's not like they're going to be cut off completely."

Gordon Adams, a professor at the American University School of International Service, told Marketplace that in the context of the whole Pentagon budget, military tuition assistance funding is actually quite small: All branches combined spent about $500 million last year. Still, the move represents a tangible result of sequester -- one that Larry Korb, a senior fellow at the Center for American Progress, believes could prompt citizens to protest.

Inside Higher Ed reports that the Army is the second military branch to cut tuition assistance -- the Marine Corps announced cessation of its program last week. The Air Force and Navy have not yet followed suit, but administrators expect them to soon.

"I'm looking forward to praising one or more branches if they choose not to follow suit, but that remains to be seen," Dakduk said. "I hope this is not political posturing. If it is, we need to get past it."