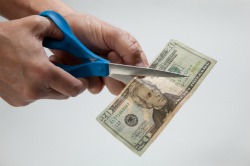 Students attending Sewanee: the University of the South in Tennessee have found that cuts in the school's tuition are being accompanied by cuts in tuition assistance.

Last February, Sewanee officials made the remarkable announcement that the institution would be reducing its $46,000 annual tuition by 10 percent. "The university has made a bold and perhaps risky move," said John M. McCardell Jr., vice chancellor of Sewanee, who was quoted by The New York Times. "But given the realities of higher education in the current economy, we believe that some college or university needed to step up and say, 'Enough.'"

But many students and their families are now discovering that they will garner little, if any, savings as a result of Sewanee's "bold" move. That's because along with tuition, merit scholarships have been cut as well.

"When Sewanee sent out this email saying they were reducing tuition for everyone, I called my parents and they told everyone about how amazing Sewanee is," said a junior at the school who was interviewed by the Chattanooga Times Free Press. "Then we got letters in our post office boxes announcing that merit students were having their scholarships cut by roughly the same amount that tuition was being cut, therefore making the tuition cut basically ineffective for all of the students."

Why the scholarship reduction? "We wanted to pull away from a lot of the merit negotiating and try to provide more aid for students who wouldn't afford it otherwise," explained Lee Ann Afton, the university's dean of admission, who was quoted by the Times Free Press.

The move is not surprising, said Tony Pals, spokesman for the National Association of Independent Colleges and Universities. "First of all, it's part of the way that institutions that cut their tuition are able to afford it," he told the Times Free Press. "Secondly, other institutions have taken a similar approach by wanting to increase their need-based institutional aid." This, he explained, helps them attract more low- to middle-income students.

Indeed, The Chronicle of Higher Education predicted in February that the Sewanee tuition cut would most likely not mean a cut in the price paid by the majority of students, since most receive need-based or merit-based aid that would likely be reduced as well. The Chronicle cited an online interview that The New York Times conducted with four higher education finance experts, all of whom agreed that the tuition cut was no more than a "Band-Aid."

"The only families assured of a price cut are the well-off minority who don't get any aid under the current policy," the Chronicle pointed out.

Nevertheless, many students say they feel cheated. "I wish they had cut the amount paid by everyone currently here by the same amount," said one student quoted by the Times Free Press, "and not retroactively reduced scholarships that were promised."