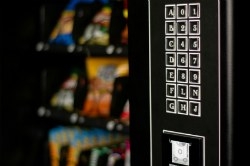 At Shippensburg University in Pennsylvania, beverages and snacks aren't the only items available for purchase through a vending machine. Emergency contraception can also be bought vending machine style for $25, according to UPI.

While the emergency contraception, called Plan B, has been available this way for at least two years, a wire story earlier this week created quite the buzz about this non-traditional vending machine item nationwide.

"This is nothing new," Peter Gigliotti, Shippensburg University spokesman told the Los Angeles Times. "I have no idea why it's getting the reaction it's getting now."

Plan B is commonly known as the "morning after" pill because of its ability to prevent pregnancy if taken soon after unprotected sexual intercourse. At Shippensburg, Plan B can be purchased from a vending machine in the university's self-care clinic. It is available, along with other health-related items such as condoms, cough drops and pregnancy tests, only after students are granted access by checking in through the healthcare lobby, UPI reported.

"We decided to use a vending machine back in our self-care clinic, which also dispenses some other things as well," Roger Serr, vice president of student affairs, was quoted in UPI as saying. "And that was a way that we could allow convenience for students, also it allowed privacy for students."

Plan B was made available at the school after a 2008 student study was conducted, in which some 85 percent of students supported making the emergency contraception available, according to a statement from Shippensburg University. No state funds or student health fees are used in making Plan B available.

"I think the issue is there's no fee money in this, and so that if I'm a student who's paying a health fee, and if I'm morally opposed to Plan B, my money is not really involved in this, and that's real key," Serr said.

Syracuse.com pointed out that Plan B is sold over-the-counter at pharmacies and federal law does allow those over the age of 17 to have access. All students reported to be attending the school are said to be 17 or older, according to the university's statement.

The Food and Drug Administration could become involved in an investigation, Syarcuse.com noted, as it appears no other vending machine in the U.S. dispenses emergency contraception. Plan B is controversial for some who consider it to be the equivalent of an abortion drug, noted Syracuse.com. Furthermore, some object to easy access when it comes to birth control and that is true even at Shippensburg University.

"To be able to walk up to a vending machine and just get that, get a pill like that, it's just ridiculous," Junior Cassandra Towsley told UPI.