Should Quitting Your Job be a 'Go Big or Go Home' Moment? 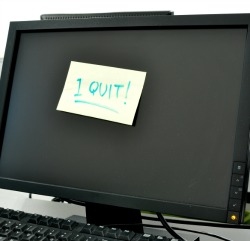 Everyone has dreamt of exactly how they would tell their boss those two liberating words: "I quit." On Sunday, one woman had her grand moment come to fruition in front of millions of people.

Gwen Dean, a 36-year-old machine engineer, made headlines when she quit her longtime job in a GoDaddy commercial that aired during the first quarter of the Super Bowl, reported Entrepreneur. Dean had been working for her employer for almost two decades. On Sunday, however, she told her boss that she quit to pursue her dream of being a full-time puppeteer.

According to Reuters, Dean was selected from a list of 100 people who had responded to a blind ad looking for someone who was willing to publicly end their career. Entrepreneur noted that initially, Dean had no idea that the commercial was scheduled to air during Sunday's big game. She kept her plans to quit a secret from everyone except her father and a handful of journalists so when the commercial finally aired, her boss were taken by complete surprise.

"I know there are other people just like me. There are other 'Gwens' out there that are holding down the fort at a job that is probably sucking the life out of them and they have this other thing they have always dreamed of doing, and I hope they recognize themselves," said Dean in Entrepreneur.

Indeed, Dean is not the first person to boldly quit their job -- Reuters recalled the former Goldman Sachs salesman who ditched his job with a scathing public resignation in The New York Times and the young woman from an animation company who quit by dancing through the office one late night to Kanye West's "Gone" and then posting the video on YouTube.

According to Today, Dean's boss actually took the news well and even seemed to find her approach amusing. Not everyone can be so lucky.

"In large part, when an employee quits with a dramatic flourish, it is due to one of three reasons: anger, frustration (including burn-out), or psychological distress. All are legitimate reasons to seek a divorce but the fall-out may be far worse than the gesture," said Roy Cohen, career counselor and author of The Wall Street Professional's Survival Guide, to CityTownInfo. "…A dramatic exit may feel good in the moment but once the dust has settled the reality and magnitude of the decision will hit home."

Deciding to quit your job can be tough and executing the decision can be equally difficult. BusinessNewsDaily compiled a list of ten smart things to do when quitting your job, many of which were tips that Arlene Vernon, an HR consultant with over 30 years of experience, also recommended. For example, Vernon advised giving your employer at least two weeks notice and giving notice to your manager in person. You should also have a written resignation letter that thanks your employer and indicates when your last day will be. Vernon also advised against talking to colleagues about your resignation until you have formally discussed it with your manager.

When it comes to giving a reason for your resignation, Vernon said, "You are not legally bound to do this, and you do not have to tell them what company you're going to, but if you can share a simple answer, then it can help smooth over the transition."

Lastly, Vernon noted that many industries are small so it is likely you could run into or work with a former coworker or supervisor again in your career; therefore, she recommended leaving a good impression during your last weeks by not trash talking the company, training your replacements and leaving detailed notes on where to find important files or information.

Dominique Jones, Vice President of Human Resources at Halogen Software, agreed that what you do during your last weeks can greatly influence the impression you leave on your colleagues. As a result, she noted that it is also important to not slack off before you leave.

"Make a great last impression. High performers set themselves apart by giving 100 percent up until their very last minute on the job," said Jones. "...Leave your employer remembering what a hardworking, valuable team member you are. Don't make them think your last day couldn't come soon enough."

"A Budding Entrepreneur Says 'I Quit' to Her Boss as Millions of People Watch," entrepreneur.com, February 3, 2014, Catherine Clifford, http://www.entrepreneur.com/article/231141

Career and Education News
Home >
News>
Should Quitting Your Job be a 'Go Big or Go Home' Moment?